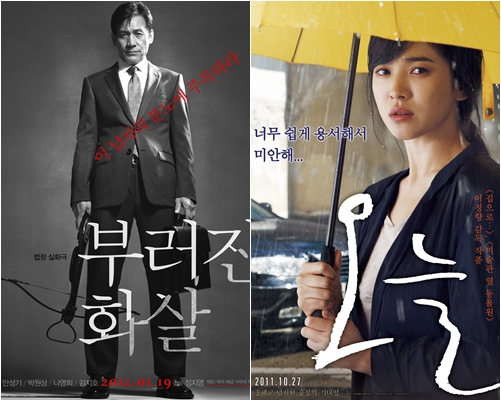 Director Jeong Ji-yeong's "Unbowed" and the film "A Reason to Live" have been selected as the 'Top Ten Asian Movies of 2011' by the American newspaper "The Wall Street Journal".

According to "The Wall Street Journal"'s website, "Unbowed" and "A Reason to Live" have been selected for the list of 'Top Ten Asian Movies' of 2011 by Dean Napolitano. The list introduced "Simple Life" and other Asian movies to the world, including Korean ones, saying they were made on a small scale, but carry lots of meaning.

"Unbowed" is based on the true story of the terrorist attack in the Seok Palace in Korea and was described as a movie that approached an irrational court of law in a critical way. "Unbowed" will be released on January 19th in Korea but has already received a standing ovation at the Busan International Film Festival.

"A Reason to Live" was made by Lee Jeong-hyang, his first film in nine years after "Art Museum By The Zoo" and "The Way Home". It centers on the meaning of forgiveness through the story of Da-hye (Song Hye-kyo), who forgives a teenager who killed her fiancé. "The Wall Street Journal" explained that "A Reason to Live" deals with a heavy subject called love and the culture of Korean women.

""Unbowed" and "A Reason to Live" in the 'Top Ten Asian Movies'"
by HanCinema is licensed under a Creative Commons Attribution-Share Alike 3.0 Unported License.
Based on a work from this source