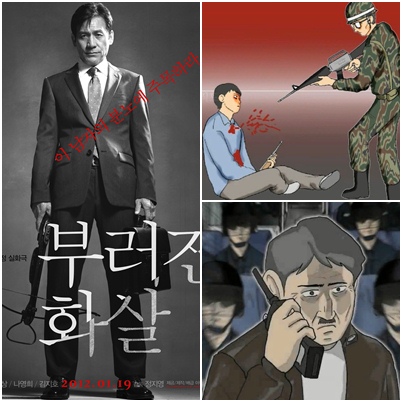 Chung Ji-young and chairman Choi Yong-bae met as director and producer of the movie "North Korea's Southern Army". "Unbowed" and "26 Years" take on the same path in reflecting the Korean politics and irrationality of the society.

In support of this kind of contribution, the Crowd Funding for movie "26 Years" broke through 200 million won on the 3rd. There was a live time Q&A session in response to this by Chairman Choi Yong-bae himself.

"26 Years" is a top secret movie about the character's involved in the Gwangju movement's plan to convict former president Chun Doo-hwan. This project was started off in 2008 under the title, "29 Years" but various difficulties stalled it for 4 years. Crowd funding will go on until the 20th of April to gather donations aimed for 1 billion Won (~US$ 1 million).

""Unbowed" contributes 10 million to "26 Years""
by HanCinema is licensed under a Creative Commons Attribution-Share Alike 3.0 Unported License.
Based on a work from this source