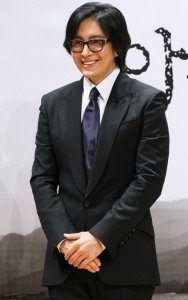 Actor Bae Yong-joon, known as "Yonsama" among Japanese fans, proved that he still has the power to keep the popularity of Korean pop culture alive. He was the star who helped trigger the Korean wave or "hallyu". He also showcased a possibility that hallyu can be broadened to the realm of tourism and food.

In an event to promote his latest book on Korean culture and travelling, "A Journey in Search of Korean Beauty", Yon-sama drew 45,000 fans to the Tokyo Dome Wednesday. Among them was Miyuki Hatoyama, wife of Japan's new Prime Minister Yukio Hatoyama.

Miyuki, known as an enthusiastic fan of Bae, met him for about 10 minutes before the event and talked about Korean culture, according to his promoting agency.

On the stage, Bae read part of his book to the audience and explained how he came to write it.

"While I toured around the various parts of Korea for months, its beautiful scenery, which I had been unaware of before, dawned on me and created the passion in me to write this book", he said.

The first edition of 50,000 copies sold out on the first day of sales, Monday, in Japan.

His book is also flying off the shelves in Korea with the publishing firm Seed Paper busy meeting the rush of orders. It topped the list as the bestseller of the essay category at Kyobo Book Center.

After the event, Bae talked to reporters with Miyuki at a press conference. "Mrs. Hatoyama expressed her hope for more active exchanges of culture between Korea and Japan. She also showed a lot of interest in Korean culture", he said. "We greeted each other in Korean and I was surprised as she asked questions in Korean sometimes".

Bae said he studied for more than one year to write the book and read more than 150 books.

"Writing was not easy. I could not sleep well for about three months before the deadline", he said.

Bae said he took over 5,000 pictures for the book, adding that he does not use a digital camera. He said he takes pictures with his heart. "I think the emotional part is crucial in taking pictures. The heart is the most important".

He also talked about his plan to farm. "I'm learning a lot of things. It's been three years since I told reporters that I would do farming. I'm interested in environmental issues. I'm interested in cultivating food that we can eat without worrying".

Yonsama's visit to Japan was also to promote the animated version of "Winter Sonata", the drama he starred in with actress Choi Ji-woo, and through which he rose to hallyu stardom in 2002 when it was a mega hit in Japan.

Bae's popularity is expected to attract more Japanese tourists to Korea. The state-run Visit Korea Committee designated the period from 2010 to 2012 as a special time for the Japanese to visit Korea.

"Undying Popularity for Yonsama"
by HanCinema is licensed under a Creative Commons Attribution-Share Alike 3.0 Unported License.
Based on a work from this source