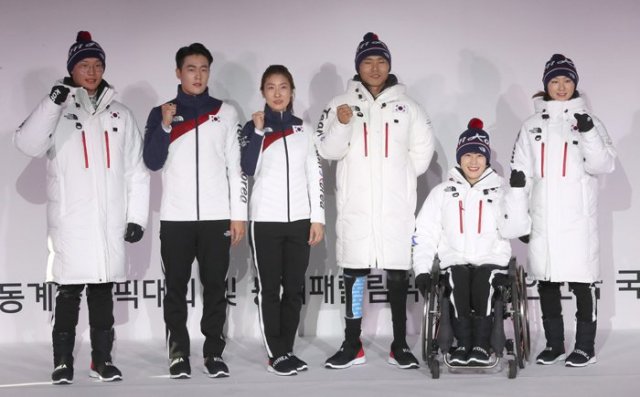 Athlestes pose in Seoul on Tuesday in the uniforms for the 2018 Winter Olympics in Pyeongchang.

The uniforms for the athletes representing Korea at the 2018 Winter Olympics in Pyeongchang were unveiled on Tuesday at the National Training Center in Seoul.

Some athletes, including speed skater Lee Seung-hoon and short track speed skater Choi Min-jeong, were on stage as models.

Koreans medalists in Peyongchang will step onto the podium in an outfit with the lyrics of the national anthem printed in small letters in the lining, bearing a Korean flag embroidered on the left chest, and red and blue lines from the flag running diagonally next to it. On the left arm it will say "Team Korea". The trousers are black, another color from the flag.

The uniform for the opening and the closing ceremonies is a thick goose down jacket as the ceremonies will take place in an open stadium.

They are sponsored by North Face.

"Uniforms for Pyeongchang Olympics Unveiled"
by HanCinema is licensed under a Creative Commons Attribution-Share Alike 3.0 Unported License.
Based on a work from this source