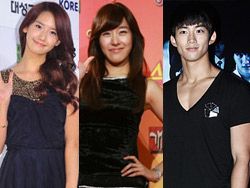 An airing of a morning show on one of the major broadcasting channels in Korea on July 26th gathered a list of private unofficial clubs or groups of celebrities that often get together for different purposes. This report has been gathering a lot of attention, giving the public a glimpse into the private lives of some of their favorite stars.

For example, Lee Han-wi, Cho Jae-hyun, and Bae Soo-bin share their love for hiking together and call themselves the "Empty Mountaineering Club". Ahn Sun-young, Harisu, and Kim Na-young call themselves the "Carnivores" because the three often meet up to indulge in their love for eating meat. In fact, they say that they cannot even go for one day without having some form of meat in their diet.

One group that's of particular interest to the masses is one that includes one of Korea's biggest actors, Jang Dong-gun. Jang is part of a large group that calls themselves the "Playboys", which includes names such as Kim Seung-woo, Gong Hyung-jin, and Hyun Bin. The man considered to be the nation's emcee, Yoo Jae-suk, meets with other group members such as Kim Yong-man and Ji Seok-jin -- who probably talk just as much as Yoo himself -- to spend the entire night chit-chatting away. These members call themselves the "Jo Club".

Jung Joon-ho, Shin Hyun-joon, and Tak Jae-hoon pride themselves in all having a "J" in their names. They're more than just friends as they have set up their own business focused on movie production. Popular actor Jang Dong-gun, along with his beautiful wife Ko So-young, is in another group where they meet regularly with actors such as Jung Woo-sung and Lee Jung-jae to eat out or even travel together. You can consider all of them the royalty of Korean drama/movies, and this was also where the ultimate royal Jang-Ko couple (Jang Dong-gun and Ko So-young) was born!

Moving down the age ladder, there are similar groups in the idol star world too. One group calls themselves the "Nuts" and is made up of members from some of the top idol groups out on the scene these days: Girls' Generation, 2AM, 2PM, etc. They each have a specific nickname where they take on a specific type of nut -- such as peanut or walnut -- and have secret get-togethers.

Another group centered on Super Junior member Eun-hyuk was formed after Eun-hyuk got closer to other stars of the same age through his radio show. This group is called "Ashtray Party" and includes 1986 born idol stars from groups such as TVXQ, Jewelry-S, and 2AM.

One group that stands out for the good that it does is called "Dda-sa Mo" which is a spin off of the Korean word for "warm". Members of this group are known to regularly plan and execute charity or volunteer projects together.

Viewers of this report commented that they "didn't know there were so many different groups and gatherings between celebrities" and that they hoped "more groups would be like "Dda-sa Mo" and do some good together.