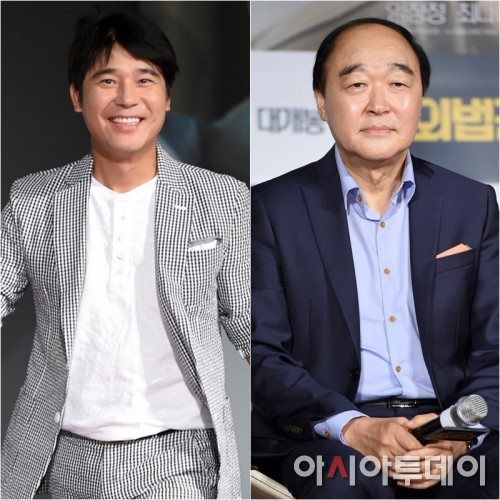 At the production junket for the movie "'Untouchable Lawmen" held on the 27th at Lotte Cinemas' Seoul Konkuk University Entrance location, Im Chang-jung said "I thought I was method but Mr. Jang Gwang becomes a totally different person when acting".

He continued, "I had a scene where I was being stomped on by Mr. Jang Gwang. I would have gotten a diagnosis of 4 to 5 weeks rests from a doctor. My body was covered with bruises. Prior to this, I thought he wouldn't really kick me but he did really kick me with hard white shoes. I was sore after two days. When I asked whether he really had to go that far, he answered saying it was 'method'". The crowd laughed.

Jang Gwang responded by saying "At first, I was careful but I was not getting into the scene. The staff put a pillow on his side and told me to kick it hard. Since I didn't really get a response with the first kick, I just went for it. Oh and I was 2nd grade Aikido black belt when I was young". This got an even bigger laugh out of the crowd.

Im Chang-jung countered by saying "My expressions in the movie is not acting, It's real. The reason I am so believable in the movie is that I was really beat up". This got an even-even bigger laugh out of the crowd.

"Untouchable Lawmen" is an action cop movie in which two crazy cops, a profiler that always uses excessive force (Im Chang-jung) and a playboy homicide detective (Choi Daniel), fight against a corrupt world. It is planned to open on August 27.

"Untouchable Lawmen's Im Chang-jung says "Method acting... Jang Gwang actually kicked me""
by HanCinema is licensed under a Creative Commons Attribution-Share Alike 3.0 Unported License.
Based on a work from this source