Upcoming Korean documentary "Get on the Bus", trailer included 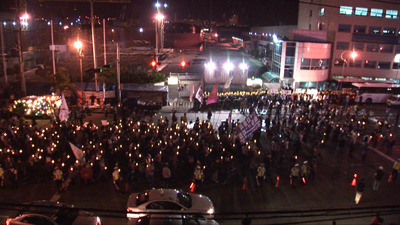 Added the upcoming Korean documentary "Get on the Bus"'s page to HanCinema database, trailer included

Synopsis
Through the Hope-bus triggered by the situation of Hanjin HIC, I cherished a hope of getting little bit soften and brighten the deep-seated prejudice in our society. The seed of hope, I'd loved to share and talk with more people. Once again, I hope to get on the Hope-bus.
Note
In 2011, SNS and Hope-bus initiated a new movement. They fractured the firm and unilateral media, and urged the arrogant political and financial circles to be awakened. They jumped over the high fence of Hanjin HIC (by a mobile phone and a ladder), stayed up all night getting hit by water cannon at the Yeongdo Bongrae-crossroads blocked up with the wall of police cars, and had the moment when the rally became a festival. It was so-called the 'meeting place' based on introducing to each other far from the anonymity as well as the 'junction' between the well-organized activist and the unorganized commonality. Hope-bus made gradual advance and became a gigantic jumble that anybody was eligible to participate. Now again, the Hope-bus is back and stood in its place. How will it be really evolved?