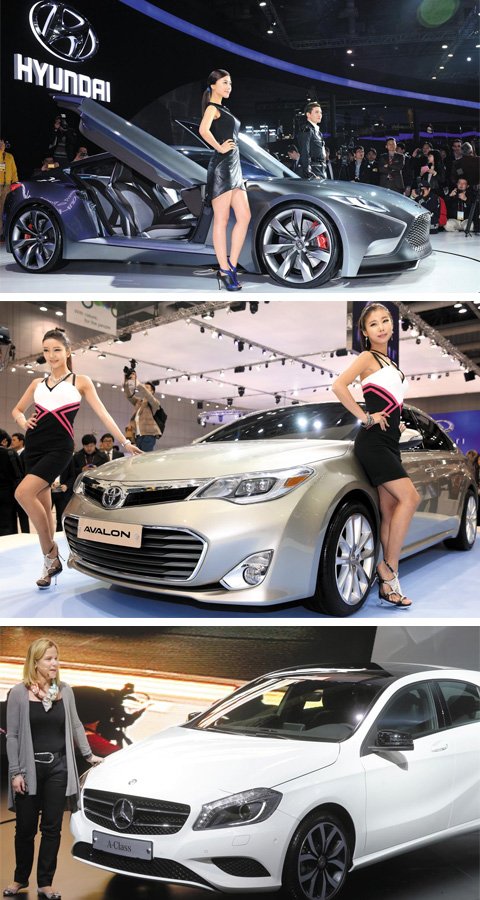 The 2013 Seoul Motor Show kicked off at KINTEX in Goyang, Gyeonggi Province on Thursday with the press preview.

Hyundai also showed off its Equus Hermes, decorated by the French luxury brand on its Equus limousine platform. Leather used to make Hermes bags, which cost more than W10 million each, was used for the seats and doors, and there are many drawers and pockets to maximize storage and create a luxury feel.

"We have made only three of this type and have not decided whether to commercially produce it like the Genesis Prada", a Hyundai spokesman said.

Maserati, an Italian luxury carmaker and first-time participant in the car show, displayed its flagship Quattroporte sedan and the high-performance convertible GranCabrio MC.

The show features carmakers' main models to be released in the second half of this year. Domestic brands focused on upgraded versions of existing models to tackle sluggish sales, while importers zeroed in on compact cars to attract younger buyers.

Renault Samsung showed off its SM5 XE TCE, a medium-sized sedan equipped with a 1.6-liter engine slated for release in June. It also premiered a small crossover utility vehicle called QM3. Ssangyong announced that it will launch an eco-friendly small sports utility vehicle.

Mercedes-Benz brought the A-class car with a 1.8-liter engine, its smallest model ever, to the auto show. As small cars with engines below two liters account for more than half of imported auto sales here, Mercedes is apparently targeting young consumers with the model.

Volkswagen displayed the Polo with a 1.6-liter engine, even smaller than the Golf.

Toyota presented the highest number of new cars to be released this year such as the compact SUV RAV4, the large Avalon sedan and the large SUV FJ Cruiser. Honda showcased its ever-popular Civic sedan.

The Seoul Motor Show will continue for 11 days until April 7.

"Updated Models, Compact Cars Take Center Stage at Seoul Motor Show"
by HanCinema is licensed under a Creative Commons Attribution-Share Alike 3.0 Unported License.
Based on a work from this source