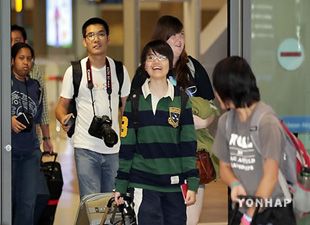 Hailing from some ten U.S. cities, including L.A. and Seattle, the fans heard that a K-pop concert had been successfully held in France. They made a request to the L.A. branch of the Korea Tourism Organization for a chance to experience K-pop themselves and arrived in Korea last Thursday.

The American K-pop fans watched the popular Girls' Generation perform. Following the performance, the visitors are partaking in various programs that illustrate the world of Korean pop culture and then will depart for the U.S. on Tuesday.