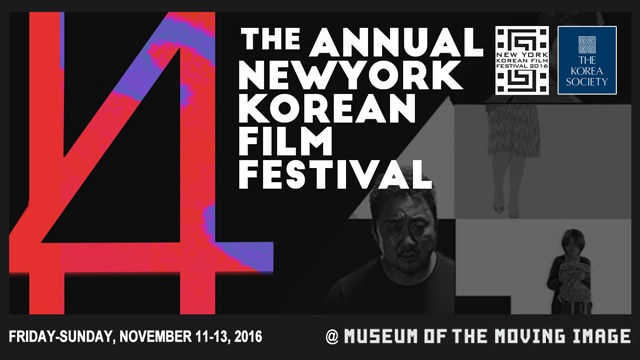 The 14th Annual New York Korean Film Festival Announces Lineup for November 11th to November 13th, 2016 at the Museum of the Moving Image

The Korea Society's New York Korean Film Festival returns to New York City's Museum of the Moving Image on November 11 to 13 for its yearly celebration of the best in Korean cinema. This 14th edition of the Festival focuses on the family, as mothers, fathers, children, and grandparents struggle to survive the zombie apocalypse, law school exams, ambitious aristocrats, and secret societies. South Korea's 2016 Oscar submission, "The Age of Shadows", and American premieres make for a not-to-be-missed showcase of one of the world's most dynamic national cinemas.

NYKFF tickets are $12 ($7 for TKS members, MOMI Film Lover and Kids Premium members / free for Silver Screen members and above). Advance tickets will be available online at movingimage.us.

All films are in Korean with English subtitles.

"As an allegory of class rebellion and moral polarization, it proves just as biting as Bong Joon-ho's sci-fi dystopia Snowpiercer, while delivering even more unpretentious fun". - Maggie Lee, Variety

"The Map Against the World"
SATURDAY, NOVEMBER 12, 2:00 P.M.
Dir. Kang Woo-seok. 2016, 129 mins. With Cha Seung-won, Yu Jun-sang, Kim In-kwon, Nam Ji-hyun. Devoted cartographer Kim Jeong-ho (Cha Seung-won) travels across the land to make the first accurate map of Korea. However, a single-minded pursuit of truth estranges him from his family and ignites political intrigue between the King's regent (Yu Jun-sang) and the rival house of the Andong Kims. Prolific and crowd-pleasing director Kang Woo-seok ("Public Enemy", "Fist of Legend") captures the beauty of Korea with this retelling of a well-known episode in Korean history.

"A creative and oddball meditation on grief and acceptance". - Elizabeth Kerr, The Hollywood Reporter

"Familyhood"
SUNDAY, NOVEMBER 13, 2:00 P.M.
New York Premiere
Dir. Kim Tae-gon. 2016, 119 mins. With Kim Hye-soo, Ma Dong-seok. Spoiled and aging actress Joo-yeon (Kim Hye-soo) decides to secretly adopt a pregnant teen's baby to make up for declining prospects in both her career and love life. But when news of her fake "pregnancy" pushes her back into the public eye, will she betray those who care about her for a few more moments in the limelight?

"The Queen of Crime"
SUNDAY, NOVEMBER 13, 4:30 P.M.
North American Premiere
Dir. Lee Yo-sup. 2016, 130 mins. With Park Ji-young, Jo Bok-rae, Kim Dae-hyeon. When law student Ik-soo (Kim Dae-hyeon)-who is about to sit for Korea's notorious bar examination-calls home to ask his mother (Park Ji-young) to pay off a $1,000 water bill, she smells a big rat. Mom, who immediately travels to Seoul to "help out", vows to get to the bottom of the criminally suspicious water bill. But who among the eccentric law-student residents of her son's apartment complex is really the criminal?

"The Age of Shadows"
SUNDAY, NOVEMBER 13, 7:00 P.M.
Dir. Kim Jee-woon. 2016, 140 mins. With Song Kang-ho, Gong Yoo, Han Ji-min. Lee Jung-chool (Song Kang-ho), a Korean police officer working for the Japanese colonial government, is out to stop a plot by a Korean independence group-or is he? Kim Jee-woon returns to Korean cinema after directing Arnold Schwarzenegger in The Last Stand with this stylish spy thriller. South Korea's 2016 Academy Award entry also stars Gong Yoo as the leader of the resistance and superstar Lee Byung-hun in a cameo role.

"Unfolding in classic action style, this rousing gem has everything one wants for an evening's entertainment" - Jay Weissberg, Variety

"This director is really looking to stage the action sequence". - Ken Jaworowski, The New York Times

"[USA] 14th Annual New York Korean Film Festival begins November 11"
by HanCinema is licensed under a Creative Commons Attribution-Share Alike 3.0 Unported License.
Based on a work from this source