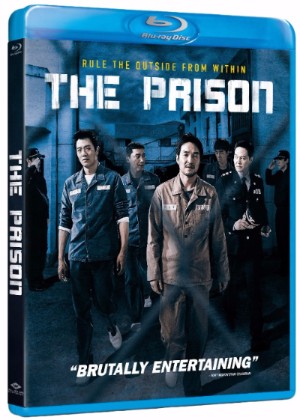 "... brutally entertaining just the way it is".
~ Cary Darling, FORT WORTH STAR-TELEGRAM

An ex-cop convict joins the secret crime syndicate run by those behind prison walls in the crime thriller "The Prison", available on digital and Blu-ray™ September 19 from Well Go USA Entertainment. Yoo-geon (Kim Rae-won, "Gangnam Blues"), a troubled former police inspector, is sentenced to prison for a hit-and-run accident, placing him with other inmates that he had put behind bars. While inside, he discovers the entire penitentiary is controlled by an inmate (Han Suk-kyu, "The Berlin File") who is running a crime syndicate with the help of the warden and guards, which provides them the perfect alibi. Soon after, he becomes a crucial member of the crime empire.

Synopsis:
After a fatal accident, Yoo-geon, a former police inspector, is sentenced to hard time in a prison he once helped fill. Once inside, he discovers the entire penitentiary is no longer controlled by the guards, but by a vicious crime syndicate that breaks out at night, using their prison sentences as the perfect alibi to commit intricate heists. Looking for revenge against the system that placed him inside, Yoo-geon joins the syndicate... but with every man out for himself, how long can the perfect crime last?

"The Prison" has a runtime of approximately 125 minutes and is not rated.

Giveaway 5 Blu-ray copies to be won for US residents only.