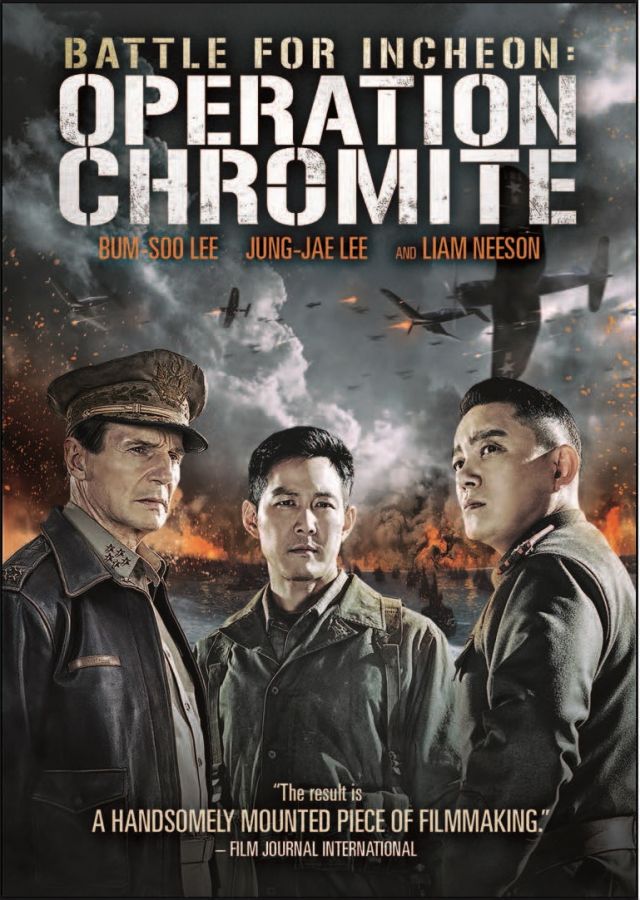 The inspiring and heartwarming South Korean war film, "Operation Chromite" is releasing on iTunes, Sony PlayStation, Amazon Digital and GooglePlay on January 10, 2017, and on DVD and Blu-ray on January 24, 2017 at all major retailers including Walmart and Best Buy. This title is one of South Korea's largest summer blockbusters making over 7 million in admissions. It was also released in theaters across the U.S. and made over $1 million in box office sales. "Operation Chromite" tells the true story of the heroes whose lives were sacrificed in order to turn the tide of the Korean War. Liam Neeson stars as General MacArthur, who led the attack against the North Koreans in the Battle of Incheon, forcing them to retreat out of Seoul.
The seemingly impossible plan is for South Korean Navy Special Forces, Captain Jang Hak-soo and 7 members of the KLO (Korean Liasion Office) unit to disguise themselves as a North Korean inspection unit and infiltrate the North Korean army command center in Incheon. Their mission is complicated and only when they give the signal will General MacArthur be able to successfully initiate the battle to take back Incheon. If they fail, chances of the offensive succeeding is nearly zero.

"Operation Chromite" is directed by John H. Lee ("The Third Way of Love", "The Last Stand" "71-Into the Fire", "Sayonara Itsuka" and "A Moment to Remember") and is produced by Jeong Tae-won (the upcoming film "Monstrum", "Triangle - Drama", "71-Into the Fire" and "IRIS"). In addition to Liam Neeson, "Operation Chromite" also stars Lee Jung-jae as South Korean Captain Jang Hak-soo ("The Assassination", "The New World", "The Thieves" and "The Housemaid - 2010"), Lee Beom-soo as North Korean Commander Lim Gye-Jin ("The Divine Move", "IRIS 2" and "The City of Violence"), and Jin Se-yeon as Han Chae-sun ("Enemies In-Law" and "Doctor Stranger").