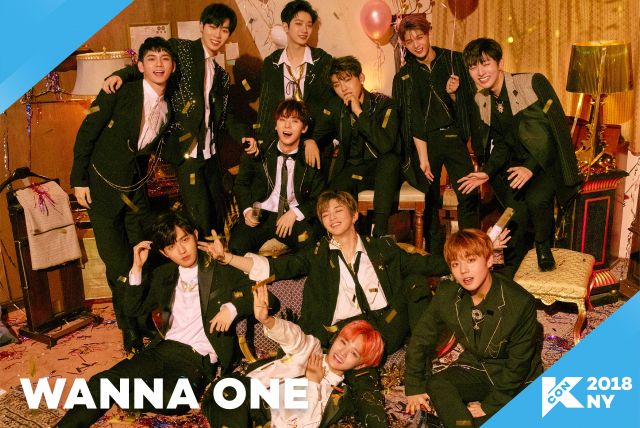 KCON USA, the world's largest Korean culture convention and music festival, announced today the first artist to join the New York edition of the worldwide event series – Wanna One. KCON 2018 NY will serve as the New York stop of the boyband's world tour, which was just announced on Sunday. Hot off the tails of releasing their highly-anticipated new album, 0+1=1 (I Promise You) this month, Wanna One will be returning to the KCON USA stage for the second year in a row after performing in Los Angeles in 2017.

Wanna One is an eleven-member boy group formed from Mnet's survival boy group reality show Produce 101 Season 2. The final members as well as group name were chosen by the public audience's votes. The members who took top 11 in the final were Kang Daniel, Park Jihoon, Lee Dae-hwi, Kim Jaehwan, Ong Seong-wu, Park Woojin, Lai Kuan Lin, Yoon Jisung, Bae Jin-young, Hwang Minhyun, Ha Sungwoon. The group officially debuted through Wanna One Premier Show-Con on August 7, 2017. Their debut EP 1x1=1 (To Be One) combined with the repackaged album 1-1=0 (Nothing Without You) made Wanna One the first Kpop group to sell over one million copies of their debut album. In March 2018, Wanna One broke their own record by selling 700,000 copies in the preorders of their second EP 0+1=1 (I Promise You). The album was released on March 19 along with title track "Boomerang".

KCON has grown exponentially since its launch in 2012, to become the undisputed epicenter for all things Hallyu (a.k.a The Korean Wave). The expansive event, that urges everyone to "Let's KCON", garnered more than 128,000 attendees last year between NY and LA combined. KCON 2018 USA will feature a line-up of A-list concerts, celebrity meet and greets, as well as workshops and panels that cover every aspect of Korean culture and entertainment. Not only does the programming offer insight into Korean pop music, it also covers food, fashion, television, film, e-sports and more. This year, KCON will expand the K-Beauty component of the convention bringing in brands normally inaccessible to U.S. consumers.

"[USA] Wanna One Announced as First Artist Added to KCON 2018 NY Line-Up @KCONUSA #KCON18NY"
by HanCinema is licensed under a Creative Commons Attribution-Share Alike 3.0 Unported License.
Based on a work from this source