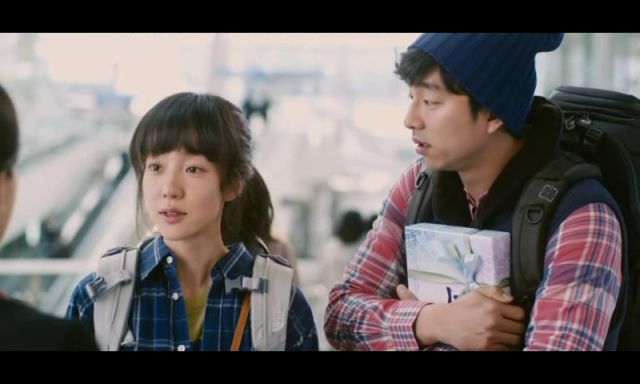 Did I say I love colors in Korean movies? I do. "Finding Mr. Destiny" has similar color palette to that of "Antique", but without such cold blue hues as the latter. The literal title is "Finding Mr. Kim Jongwuk" (김종욱 찾기) and basically it's about it. But it would be very hard to describe this movie in one sentence.

This movie was based on the musical play under the same title and done by the same director Chang You-jeong. After the musical, she directed the movie as well. Perhaps this is why little me was happy seeing musical performance inside the movie, ohohoho!

The movie starts by synchronically showing both of our protagonists, Seo Jiwu (played by great Im Soo-jung) and Han Gijun (charming as always Gong Yoo). He is fired from work, she is struggling with directing the musical where leading actress is immature idiot/idol/whatever, plus there is an older diva Su-Kyeong (Jeon Soo-kyung) embittered by the younger star. As for Gijun, he is perfectionist neat-freak, bound to be true no matter what. Well, being honest while working at travel agency is not necessary a good trait. To the customers wanting to go to Bali, he reminded of tsunami and found this as the main point. Not dancing, flowers and sun, but tsunami. Hence - he was sacked. Jiwu, on the other hand, is a messy, but somehow organized (on her own rules) girl (eh, I'm trying to feel young too, she's 30, fine).

Her father, maybe concerned, maybe annoyed by her unfortunate life (yes, younger sister is close to be proposed to... hmm... that reminds me of some real life drama...), especially by her lingering feelings for her first love, decides to hire a professionalist in searching for "first loves".
The professionalist being Han Gijun. Well, self-proclamed pro, because he never found anyone. Granted, he just started this business after the serious brawl with his sister and brother-in-law.
o meet again. Ten years passed and they never met.
When Gijun finally finds the subject of his tireless efforts, he realizes his feelings for Jiwu.
Oh, rom-com, isn't? 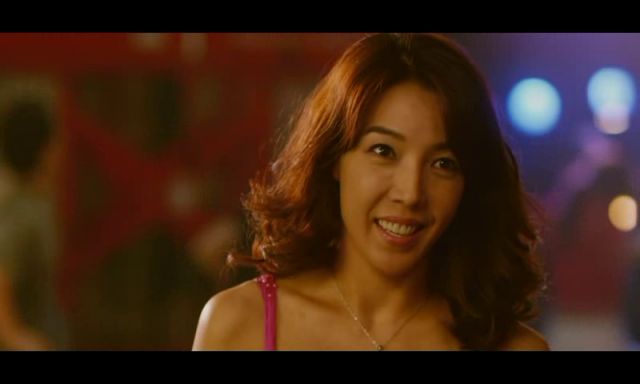 But it's not usual cliche-filled rom-com. A boy meets girl. They fall in love. There is another party involved. They overcome all obstacles. They kiss with the setting sun at the background (oh wait, that was Rhett and Scarlett...). Why not? Because there is no other party involved here. There are no major obstacles. The only one obstacle is their mindset and clinging onto something long dead. The only party involved is a guy whom Jiwu held in her mind for 10 years, even though she removed him from her heart much earlier, without even realizing that.
It is easily noticeable that the movie was directed by the woman. It's filled with details that build up the characters. The characters are alive, warm and human. I'm not saying directors who are men don't do it, they do. But there is a different approach to it. We all thrown in the middle of the action, Jiwu is in the middle of rehearsing the staff for the musical, only for Gijun the beginning of the movie is equal to the new beginning in his life. He starts the company "첫사랑 찾기 주식회사" (Finding Your First Love Company) and awaits his future. But towards the ending of the movie, especially after the musical, the new beginning is also made possible for Jiwu. The musical is actually the turning point in her life, she realizes the joy of standing on stage (yes, she recorded a song long time ago), yet she's not craving for more spotlight, but she is able to sort out her feelings now.
Jiwu completes Gijun and vice versa. They give what the other party lacks. They are not usual bickering pair, they get along really well. They understand each other. Jiwu's father has nothing against Gijun and even steals his daughter's diary to help the young man in finding this damned Kim Jongwuk. The problem with finding the guy lies not only in complete ignorance of Jiwu, who doesn't know his address or anything, but also in dozens of Kim Jongwuks. They even found a buddhist monk and some recluse young man.
As the movie progresses, some kind of cracks start to appear in our image of Jiwu's memories. She's treasuring the memories of India, yet she's strangely unwilling to turn them into reality. She's done nothing to find her first love. Not even checking him up on the internet. It looks as if she was absolutely content with the way things are now. Perhaps she realized, with time, that what she thought of this love was in fact only infatuation? It happens. But this her first love became her excuse in avoiding any talk about future, guys, dating etc.
Gijun begins to realize this by adding to Jiwu's reluctancy the ID card he found stuck behind the picture in her diary. Kim Jongwuk's ID card. With his address.
The reason behind girl's behavior is normal. Not clash of the families, not cancer or anything. She simply feared that meeting with Kim Jingwuk would destroy all those beautiful memories they made together in India. She's afraid that in place of feelings they shared, a discontent and even slight disdain might appear. And this is what I found as such "womanly" trait here. This fear exactly. The fear of seeing indifference in the eyes of the former lover. The fear of confronting the truth, but instead comforting oneself in memories. Memories always stay the same. This is why they are both a blessing and a curse in the same time. Like pharmakon, like Gorgon's blood.
I completely have nothing against the cast. Im Soo-jung I love from the moment I saw her in "...ing". But then again, I love this movie and Kim Rae-won, so... And after "I'm a Cyborg, But That's OK" I realized I'm her fan. I'm even willing to watch "Come Rain Come Shine", eh... 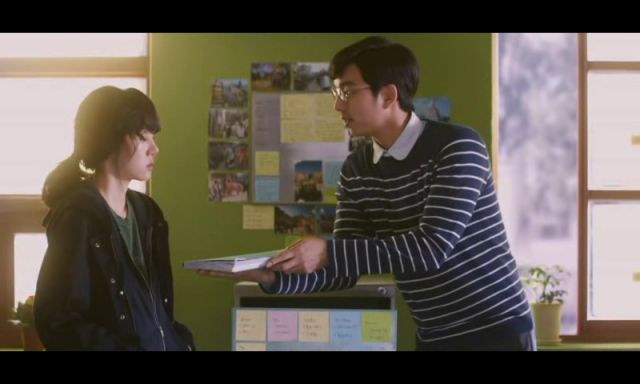 This is where I keep list of heartbroken ladies.
It's the first project for Gong Yoo after his discharging from the army, and although I'm hungry for more, I'm pleased with what I got. He has this kind of charisma that makes him memorable long after the watching. And he has a good understanding of his characters, giving them different touch each time. A talent to create distinctive, yet "Gong Yoo - marked" characters.
Plus, if anything else fails, those legs...
Jeon Soo-kyung - I'm envied of her body. Damn... I like her ever since "The Best Couple" (yes, she was that booze-loving unni with pet snake named Stephanie), so I was so so happy to see her in this movie as well.
Other characters were real, funny, normal as well. Especially Jiwu's sister and father.
The editing was perfect, I liked the way how the scenes in Korea made transitions to the scenes in India and vice versa. I liked the angles and colors. The montage was really, really good. Only one minor flaw, oh well, I'm not sure if it's a flaw anyway. Somehow Im Sujeong didn't look comfortable while dancing and singing. But this may be easily explained by the awkwardness the character might experience. If not, this would be my only point.
Music was good. 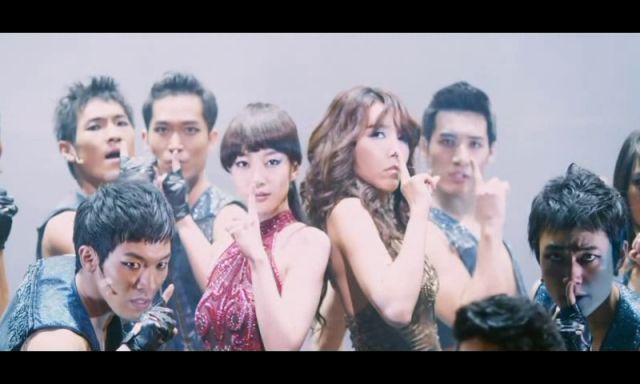 Why I chose the still from the ending of the movie and not the official poster as the anchor pic? Because this movie is about destiny. As we got to know by the end of this movie - they met once per chance at Osaka airport. She avoided the meeting with Kim Jongwuk, and he wanted to go back to Korea to confess (and we know he didn't in the end). Either we believe in it or not, we may call it even a blind chance, it really doesn't matter. Both of our characters don't recollect this meeting, it was unimportant, it just vanished from their memory.
First love doesn't equal to true love. And we could pass our future love interest without knowing it.
I thought about other quote from a drama ("Glory of the Family" this time), when main character says to the woman he loves: "Thank you that you found me and recognized me. Thank you that you didn't pass me and ignored me".
This is exactly the same situation, so maybe we met our destined one without even knowing this? It takes some time (10 years in this case), and going to the beginning (the airport in this case), but waiting doesn't give us anything. Only when we are active, we can find our destiny.
Hmm... I can't remember when I was at the "The Day Before" premiere, but well... ekhem...

"[User Review] Finding Mr. Destiny"
by HanCinema is licensed under a Creative Commons Attribution-Share Alike 3.0 Unported License.
Based on a work from this source