UV Makes Comeback With "Luck To Everyone" 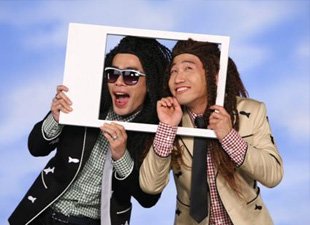 Comedic rap duo UV (made up of Yoo Sae-yoon and Muzie) will be making a new release with the song "Luck To Everyone" On July 5th.

The two, along with SK Telecom, are hoping to get everyone hyped for the London Olympics with the new song. It starts with Yoo narrating in the beginning, "To all the people of the world, we're cheering for you. We believe in our potential". Then it later breaks into an addictive chorus with the words "Go go Korea!".

UV, known for their modern twist on '90s style music with comedic rap lyrics, is hoping to bring everyone in Korea together as one to cheer for Korea's Olympic teams through this song.

"UV Makes Comeback With "Luck To Everyone""
by HanCinema is licensed under a Creative Commons Attribution-Share Alike 3.0 Unported License.
Based on a work from this source