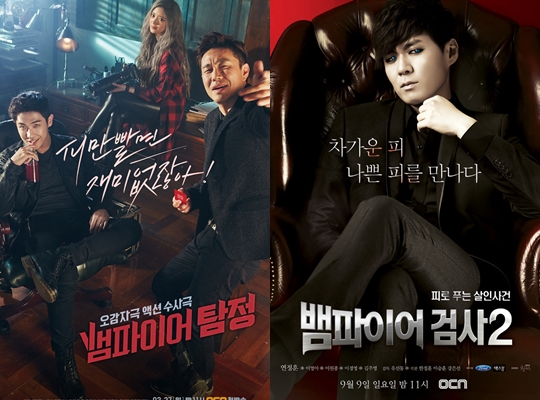 Some new vampire stories are headed for OCN.

"Vampire Detective" is about a private detective named Yoon San (Lee Joon) who becomes a vampire one day and solves various cases. At the same time he looks for answers for the mysteries surrounding him. This is the first vampire detective story in Korea starring Lee Joon, Oh Jung-se, Lee Se-young, Lee Chung-ah and Jo Bok-rae.

"Vampire Detective" is another one of the vampire series like "Vampire Prosecutor" which started in 2011 and rated as high as 4%. However, there are differences and similarities between the two.

The biggest difference between the two is that the main characters of the story have different jobs: one is a detective and the other is a prosecutor. In "Vampire Prosecutor", Yeon Jung-hoon uses cases given to him by the superior office to investigate, while in "Vampire Detective", Lee Joon is a private detective who uses his various networks and personal abilities to solve various cases for clients. Also, in "Vampire Detective", Lee Joon is younger blood so there are going to be more stimulating actions scenes. The comparison between "Vampire Detective" and "Vampire Prosecutor" on the OCN official blog also stands out; age, job, the usage of blood, fashion and their helpers.

CJ E&M Lee Seung-hoon said, ""Vampire Prosecutor" brought on a craze as the first vampire investigative drama in Korea. "Vampire Detective" is the pride of OCN and uses only the benefits of a detective drama to present entertainment".

Meanwhile, "Vampire Detective" can be seen on the 27th at 11PM.

""Vampire Detective" VS "Vampire Prosecutor", the differences"
by HanCinema is licensed under a Creative Commons Attribution-Share Alike 3.0 Unported License.
Based on a work from this source