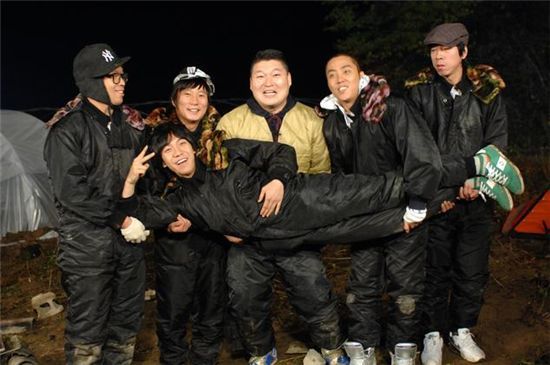 A scene from variety show "Two Nights and One Day" [KBS]

KBS variety show "Two Night and One Days" is aimed at visiting the South Pole for a shoot in March, according to the show's producer on Tuesday.

"We haven't set a detailed schedule yet but are laying out our plans with March in mind", Na Young-suk told Asia Economic Daily over the phone.

He added cautiously though, that the date may be pushed back since it is not easy coordinating the schedules of the cast composed of singers, comedians and actors. "We're having a hard time setting a time frame because it's not easy for everyone to push back or miss out on all their other activities for two whole weeks".

"Two Night" is the first of a two-part weekly show titled "Happy Sunday" starring hosts Kang Ho-dong, Lee Seung-gi, Eun Ji-won, MC Mong, Kim C and Lee Soo-geun. The six go on the road to travel to various locations throughout Korea which are relatively unknown to the general public.

"Happy Sunday" is the most popular show on television in the non-drama category with its ratings recently hitting the upper 20 percent range. The show won the award for best TV program at the year-end 2009 KBS Entertainment Grand Prix.

"Variety show "Two Nights" eyeing March for South Pole shoot"
by HanCinema is licensed under a Creative Commons Attribution-Share Alike 3.0 Unported License.
Based on a work from this source