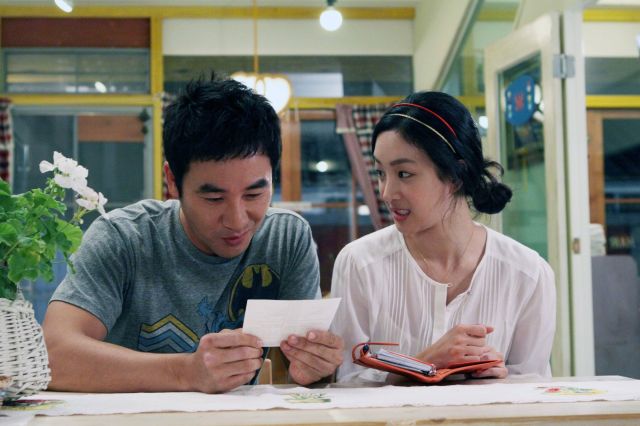 Now We go wherever the stars go! Here's the hottest entertainment news of the week! Let's go!

Can it be true[Interview : Uhm Tae-woong, Actor] "I uploaded that wedding photo. We took it on the set of our movie, and we looked really great together, as the movie intended".

It turned out that the photo was taken as part of filming for the upcoming movie "Never Ending Story". In the movie, Uhm Tae-woong and Jung Ryeo-won will play a dying couple.

[SOV]
[Interview : ] "We work really well together, don't we

Next up, we have news of a real-life wedding.

After five years of dating, Yoo Ji-tae and Kim Hyo-jin have finally tied the knot! With a guest list filled with top celebrities, the wedding reception felt like an awards ceremony. We hope they will be happy always!

A group of K-pop stars will be joining Japanese stars at a music festival at the end of December.

This will mark TVXQ's third appearance at the festival, while Girls' Generation and Kara will become the first Korean girl groups to participate. It goes to show just how popular K-pop stars have become even in countries outside of Korea! Kohaku Uta Gassen will air live on the 31st.

Kara, who will be flying to Japan for the Kohaku Uta Gassen, remains busy as ever in Korea.

Gyu Ri, the leader and main vocal of Kara, stars in the musical "200 Pounds Beauty!" She had also taken part in a musical in Japan, and her fellow theater actors are happy to work with her.

[Interview : Oh Man-seok, Actor] "This is Gyu Ri's first musical, and she works so hard even with her busy schedule".

Meanwhile, Kara's Hara and SeungYeon [승연] are also busy in Korea with TV commercials. They gave us a little hint about what we could look forward to in the new year!

This week's top entertainment headline is the 2011 Mnet Asian Music Awards, where the hard work of all of the Hallyu stars we've been talking about is recognized and rewarded. This year's awards ceremony was especially exciting with a controversial performance.

Of course, we're talking about none other than the kiss performance between 4minute's Hyuna and BEAST's Jang Hyun-seung! It was broadcast live through YouTube.

About 10,000 K-pop fans flocked to Singapore to see their favorite stars. We wish them the very best as they continue on in their careers!

These stars are everywhere all around the world many kudos to them for performing so well with jetlag.
I'm sure the fan's love and support definitely help.

"VCR1 K-Celebrities"
by HanCinema is licensed under a Creative Commons Attribution-Share Alike 3.0 Unported License.
Based on a work from this source