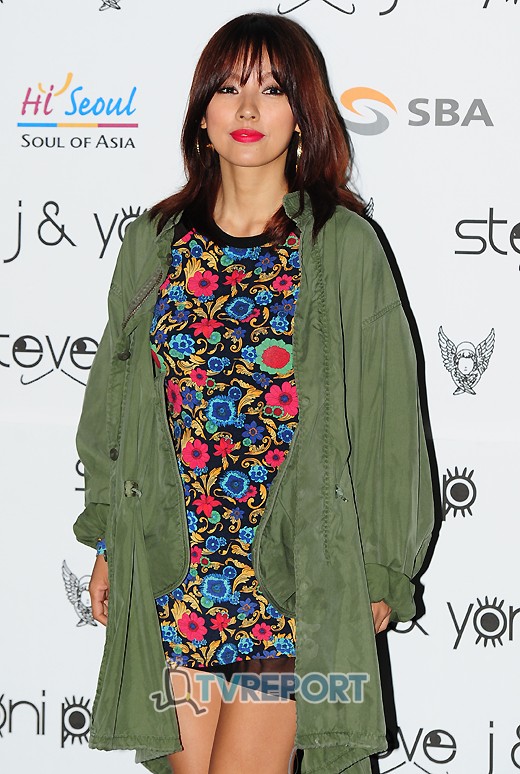 We go wherever the stars go! Here's the hottest entertainment news of the week! Let's go!

Our #5 news of the week is the fan meeting of sexy diva Lee Hyori.

The rain was no match for Lee Hyori's popularity. The cameras began flashing as soon as she stepped out.

[Interview : Lee Hyori, Singer] "Thank you for coming despite all this rain".

Lee Hyori thanked and shook hands with each of the fans who had waited in the rain to meet her.

She says that it was a precious opportunity for her to connect with those who support her. We're all looking forward to the next time we can see Lee Hyori onstage with her next hit track!

Next up! We hear that our favorite stars in the military recently took part in a marathon.

The 8th Korea Defense Daily Comrade Marathon runners included a number of Hallyu stars. Their fans arrived early in the morning to get a rare glimpse of celebrities doing their military service.

There were 5,000 runners all together, including army, navy, and air force soldiers as well as civilians. And the first celebrity star to cross the finish line is Lee Wan, who first became famous as Kim Tae-hee's younger brother. Kim Ji-suk and Kim Ji-hoon-I finished the race soon after.

[Interview : PD] "Do you have anything to say to your fans

[Interview : Kim Ji-hoon-I, Celebrity soldier] "I just want to thank them for coming out so early in the morning to run with us and to cheer us on".

The marathon was a long-awaited opportunity for us to catch up with our favorite stars in the military! We wish them all the best!

Choshinsung's Jung Yoon-hak is the latest star to join the military.

Choshinsung is a popular Hallyu group in Japan, having even topped the local Oricon chart.

Choshinsung's leader, Jung Yoon-hak, had a goodbye fan meeting with 20,000 of his Japanese fans.

With his fans' support, Jung Yoon-hak joined the Korean Army on the 25th. We hope to see him back soon after he completes his service! Choshinsung forever!

For our #2 news, we have Tablo's comeback after an 18th-month break.

Tablo, the singer-songwriter and Epik High member, recently released his new solo album and is planning his comeback on a TV music program.

His comeback is a big issue because he had been involved in a scandal regarding his educational background.

His fellow musicians supported him by featuring on his album and sending him words of encouragement.

His hardships have made him stronger, and his music deeper, than before.

Our top news of the week is about a video that was released by idol group JYJ.

The group has always been close to their Thai fans, kicking off their world concert and holding solo fan meetings there.

After the recent floods, JYJ sent their Thai fans a video message of hope. Let's hear it together.

[Interview : JYJ] "Sawadikap! JYJ kap. We've heard that so many people in Thailand are suffering because of the recent floods. We hope that the flooding will stop soon, and that everyone will be able to rebuild their lives. Don't lose hope. This has been JYJ. Thank you".

That's right. Rain would not stop a lot of people from getting a signature from Lee Hyori.
And great to see that Tablo is coming back strong with a new album. There have been many fans waiting.
Yeah. Very proud of you buddy.
And I'm so glad that JYJ has really reached out to Thailand during their time of crisis.