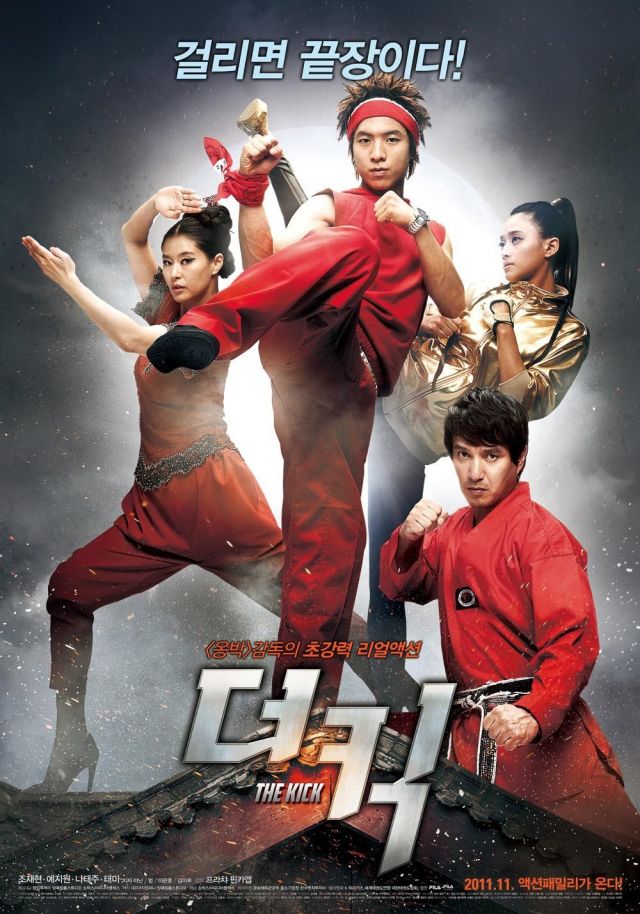 Arirang Today visited the press preview for "The Kick", a collaboration movie between Korean actors like Cho Jae-hyun and Ye Ji-won and Thai director Prachya Pinkaew, famous for movies like "Ong-bak".

Na Tae-joo, who is actually a taekwondo master in real life, beautifully performed all of the action scenes in the movie himself.

[Interview : Prachya Pinkaew, Director "The Kick"] "We had a lot of fun and laughed a lot while making the movie. I hope you enjoy it, and look forward to it. Thank you".

"The Kick" is themed around taekwondo, Korea's traditional martial art. The movie features not only classic taekwondo moves but also scenes that fuse taekwondo with K-pop. Arirang Today met with the lead actors to find out more.

She's adorable even when she messes up!

[Interview : Cho Jae-hyun, Actor] "Hello, I'm Cho Jae-hyun. I play Master Moon in "The Kick". In Thailand, we found that the locals were much more passionate about K-pop and taekwondo than we had expected".

Cho Jae-hyun is a well-established actor in Korea, and he did his best to lead the younger, more inexperienced actors when on set.

[Interview : Ye Ji-won, Actress] "I practiced so much for the action scenes that I ended up getting my 1-dan black belt. I keep saying in interviews that I'm going to get my 2-dan as well. Why do I do that

[Interview : Cho Jae-hyun, Actor] "While we were filming, there was one set that smelled like sweat and was so hot I didn't even want to go in. But then I saw Ji-won sleeping on a mat inside".

[Interview : Ye Ji-won, Actress] "My secret was the Tom Yum Goong soup, which is one of the world's three most famous soups. The soup kept me healthy until we finished filming the movie".

From a subway train to a jungle, all of the scenes in "The Kick" were filmed on location. Following the director's orders, the actors also performed all of the action scenes themselves without computer graphics, stuntmen, or wires.

[SOV]
[Interview : ] "Drunk in the memories of love While drawing her pink lips In her beautifully drawn eyes "

Na Tae-joo says he was responsible for keeping everyone entertained while filming.

[Interview : Na Tae-joo, Actor] "Like Jackie Chan had his "Drunken Master", I hope the audience will always remember Na Tae-joo's taekwondo dance action in the movie "The Kick"".

[Interview : Ye Ji-won, Actress] "I hope that families will come together to enjoy the movie".

A world-renowned director and Korea's best actors present "The Kick!" The movie has already been sold to 36 countries including France and Hong Kong.

"VCR2 Weekly Star Scene"
by HanCinema is licensed under a Creative Commons Attribution-Share Alike 3.0 Unported License.
Based on a work from this source