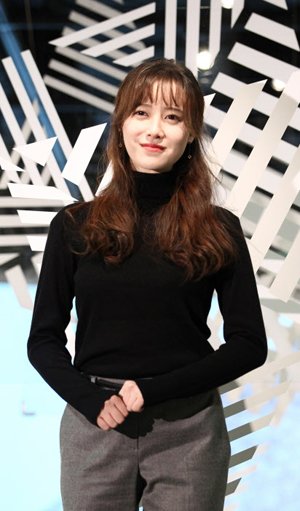 Actress Ku Hye-sun poses for a photo at a gallery in Seoul on Wednesday, a day ahead of her painting exhibition.

Actress Ku Hye-sun on Wednesday offered a sneak peek at her exhibition of over 50 paintings. The exhibition runs from Jan. 5 to Jan. 29 at Seoul Arts Center in Seoul.

Koo had similar exhibitions eight times already and released several music albums whose popularity led her to hold a concert in 2015. The versatile actress even directed seven independent films.

The colors of her paintings on display are mostly darkish yellow.

"The color yellow is reminiscent of my childhood dream but I felt it's dark", Koo said. "I became an actress as I had dreamed of, but I'm not sure if that is what I really wanted to do. That's why I'm dabbling in other things as well like painting and film-directing.

"I don't even care about the success of the exhibition. I just wanted to express what I felt on canvas", she added.

This was her first public appearance since her marriage to actor Ahn Jae-hyun in May last year. The newlyweds will appear together in a reality show that shows their candid life.

"Married life cannot always be happy. At first I tried to show only the positive side but we ended up arguing because of that", Koo said.

A passage on one of the walls at the exhibition room reads "What I'm most afraid of is having a dream". Asked of what her dream is, Koo said, "I am always dreaming of something, and through repeated trials and errors while pursuing my dreams, I get to know myself better", she said.

"Versatile Actress Holds Painting Exhibition"
by HanCinema is licensed under a Creative Commons Attribution-Share Alike 3.0 Unported License.
Based on a work from this source