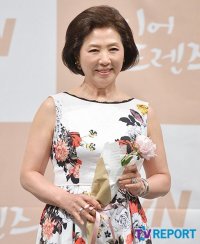 The mother-daughter relationship is complicated for most women. It is often fraught with hurt, disappointment, anger or conflict and love.

But undoubtedly, most women cannot deny that mother is synonymous with sacrifice and devotion, at least in the traditional way of Korean thinking.

It is often thought that the relationship between a mother and daughter solidifies and deepens when the daughter goes off to get married and learns for herself the sacrifices and demands of motherhood.

It is this long-twined relationship between mother and daughter that is the theme of the essay-turned-play, "A Long Visit". The play will open in Taehangno, central Seoul, on April 12 throughout March 6.

The Korean title is "Chinjong Omma", or daughter's mother.

The play is based on the best-selling essay written by author Ko Hye-jung, and deals with her own life story. The essay was first published in 2004.

The story revolves around a mother who devotes her entire life to her daughter but in the end dies alone as her daughter is too busy with her married life.

In the play, veteran actress Go Doo-shim, who has long played mother roles in TV dramas and films, will act as the mother.

"I've decided to star in this play because I was really impressed by the essay and wanted to show the true integrity of what a mother is", Ko told reporters.

The 56-year-old actress plays a mother whose life collides with her married daughter's busy life and trivial affairs.

"I've always acted in plays once every two years to interact with my audiences through a live performance. But this time, because of a long absence from the stage, I was thirsty for theater performance", she added.

Known as a "mother of all" throughout her 36-year actress career, Ko said that this play is somewhat different from the role of mother she has played in other works.

"It is a totally different experience for a mother to see her grown-up daughter get married and have a child. I think only after marrying their daughter off, can they truly be a mother", she said.

Ko said that her daughter in her real life will get married in September. "The mixed feelings I have overwhelmed me at first when my daughter told me that she planning to get married", she said.

Ku Tae-hwan, director of the play, said that he wants to convey sympathetic messages to the audiences who might share similar experiences and memories about their mothers.

"Many children forget about their mothers when they grow up or get married. The play will arouse audiences to realize the importance of the family, especially our mothers", he said.

He said that many plays now on stage take the theme of family, but mostly they focus on history, not the relationships between family members themselves.

Ko Hye-jung said that it is a good play for a mother and a daughter to see together but recommends men to see the play to better understand what a woman's life is.

"The play heartbreakingly depicts not only a devoted mother of our age but also cheerfully offers a lot of humor between the two", she said.

Actress Jang Young-nam, who performed in the play, "Vagina Monologue", will act as the daughter, Kang Joo-hee.

The play is produced by CJ Entertainment.

"Veteran Actress Ko Reaffirms 'Mother of All' Role in New Play"
by HanCinema is licensed under a Creative Commons Attribution-Share Alike 3.0 Unported License.
Based on a work from this source