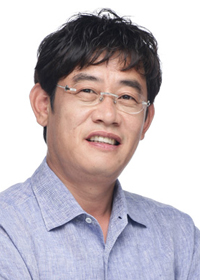 Veteran comedian Lee Kyung-kyu, 52, revealed he is suffering from a panic disorder while appearing on a popular entertainment program, Sunday.

Lee, one of seven presenters on "Qualifications of a Man" that airs on KBS, made the disclosure Sunday when the program conducted a psychological evaluation on them. Lee said that he has been receiving treatment for the disorder as well as taking medication for the past four months, and has been improving. A panic disorder can involve uncontrollable fear, heart palpitations and chest pain.

The comedian said many times he has felt as if he would die and sometimes he would walk up 10 floors if he didn't like the idea of taking the elevator. He attributed his problem to fatigue.