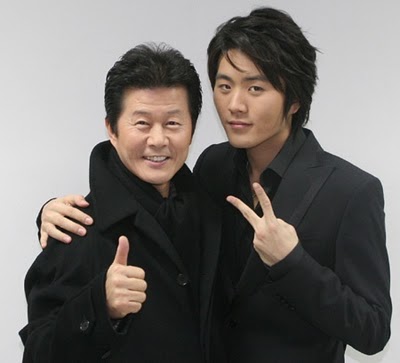 In an attempt to bridge the gap between the older, veteran singers in South Korea and the younger singers who are still up and coming, singer Tae Jin Ah has established a brand new celebrity soccer club. The team was created for the Korean Singers' Association and will feature players from different generations coming together for a common hobby while providing avenues for stars to pick at each others brains for advice and guidance. The club is being named Nightingale FC (named for the voices of the singers involved) and captained by Tak Jae-hoon. The vice captain has already been named as Kim Jong Hook. Players already signed to the club include Kim Gun-mo, Im Seulong from 2AM, Choi Minho from SHINee along with many others. The inaugural event to break in the club will be held in the near future coming complete with a benefit to help those of the Japan earthquake and tsunami.

Once again I'm left with nothing but positive feelings about this venture. It seems much too rare in western countries for artists to come together like this. This feels like a positive outlet that gives the younger idols a place to go and find answers about their careers and lives from the ones who have been there previously. Kind of like a Boys' Club for Korean idols.

Via AllKPop in collaboration with Ani.me

"Veteran Singer Establishes Celebrity Soccer Club"
by HanCinema is licensed under a Creative Commons Attribution-Share Alike 3.0 Unported License.
Based on a work from this source