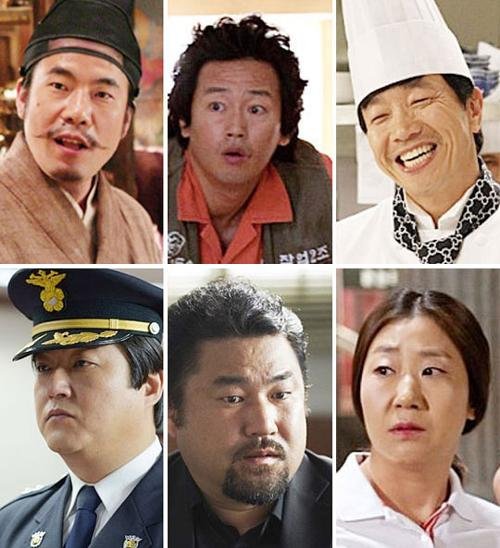 The influence of supporting actors is growing as they play a critical role in helping to set new box-office records for Korean films even though they may appear on screen for only a few minutes.

In fact, the actor who has appeared in the highest number of Korean movies that drew more than 10 million moviegoers was not leading man Song Kang-ho. Instead, that honor goes to supporting actor Oh Dal-soo, who features in four of the nation's nine most successful flicks.

He can also be seen in "The Attorney", which recently reached the 10-milion mark in terms of cinema attendance. Many critics say Oh's performance boosted the film's ticket sales.

The total number of moviegoers for films he has appeared in since 2011 stands at 47.52 million.

Apart from Oh, those whose faces have been cropping up a lot in recent years include Kim Jung-tae, Ko Chang-seok, Kwak Do-won, Park Chul-min and Ra Mi-ran.

On average, these six have appeared in 14 films each over the last three years. Due to their smaller roles and filming schedules that last 2-3 months, they can squeeze more in and even work all year round, unlike A-listers who often make just one or two films a year.

Sometimes they find themselves in the enviable position of having two of their films screened at the same time. On at least one occasion, two of Ko's movies were released on exactly the same day, with "Quick" and "The Front Line" both hitting theaters on June 20, 2011.

All six supporting actors cut their chops on the stage before making their film debuts, which gave them time to hone their skills. The majority made strong impressions on audiences in their first movies, leading some to become typecast later in their careers. Kwak, for example, has played cold-hearted villains in films such as "The Yellow Sea" (2010) and "Nameless Gangster" (2012).

"When casting leading roles, the actors' skills are undoubtedly important factors, but their profiles and popularity also matter", said a producer of a film production company. "As movies do not have much room for supporting actors to show their skills, they have to make a strong impression even during brief appearances".

As supporting actors with a specific image are often preferred, typecasting can be prevalent.

"Supporting actors need to broaden their range by taking on bigger roles and developing new characters rather than sticking to stereotypes. We also need more new faces to expand the range of Korean actors overall".

"Veteran Supporting Actors Behind Success of Domestic Films"
by HanCinema is licensed under a Creative Commons Attribution-Share Alike 3.0 Unported License.
Based on a work from this source