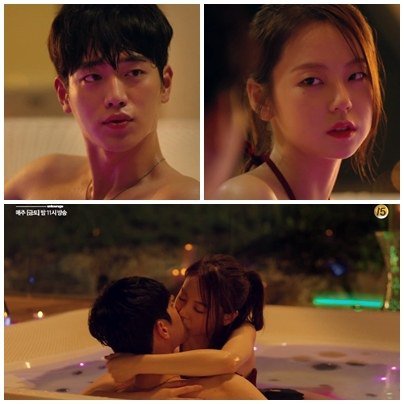 The kiss scene between Seo Kang-joon (Cha Yeong-bin) and Ahn So-hee (Ahn So-hee) on "Entourage" is a big hit.

tvN "Entourage" released a footage of Seo Kang-joon and Ahn So-hee kissing in the tub and making it Day 1 for them.

The footage is of the two in the sixth episode and it already has 1 million views on Naver TVCast.

Ahn So-hee asked Cha Yeong-bin if she was doing the right thing and he said, "You are doing well and you will do well in the future. You still have bad taste in men". Ahn So-hee said, " I like you but I want to do well in this movie". Cha Yeong-bin then said, "Then will you reconsider me after this movie?" and they kissed.

Netizens say, "I can't believe I watched Ahn So-hee kissing someone", "It's so sweet" and more.

Meanwhile, "Entourage" can be seen every Friday and Saturday at 11PM.

"[Video] "Entourage" Seo Kang-joon and Ahn So-hee kiss in the tub, 1 million views"
by HanCinema is licensed under a Creative Commons Attribution-Share Alike 3.0 Unported License.
Based on a work from this source