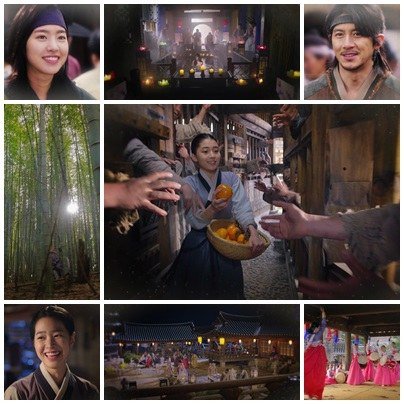 The teaser was released on the 7th. It starts with director Lee Byeong-hoon's filmography and then the background of the drama which is actually located in the "Dae Jang Geum" theme park. The teaser is made up of colors and fancy bath scenes, along with gisaengs' drum performances and the cries of the prisoners in the Jeon Ok. Young Ok-nyeo (Jung Da-bin) is running around busily in the teaser too.

Yoon Tae-won (Go Soo) appears with a playful smile and the grown-up Ok-nyeo (Jin Se-yeon) looks intelligent. But soon the scene changes into the running feet of warriors who seem to be tracking down someone in a forest of bamboo trees.

The teaser ends with the two main characters walking past, not recognizing one another.

Jin Se-yeon plays Ok-nyeo who was born in a prison but is intelligent and bright. Go Soo plays Yoon Tae-won who doesn't bring out his pain on the outside.

Meanwhile, "The Flower in Prison" is based in the Joseon times about Ok-nyeo and the mysterious character Yoon Tae-won. The first episode can be seen on April 30.

"[Video] Jin Se-yeon and Go Soo's "The Flower in Prison" teaser video"
by HanCinema is licensed under a Creative Commons Attribution-Share Alike 3.0 Unported License.
Based on a work from this source