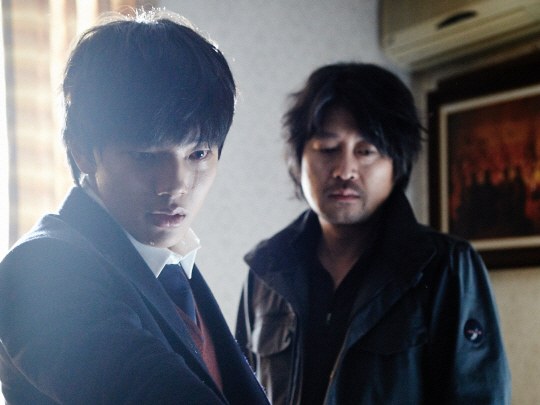 "Hwayi : A Monster Boy" has been confirmed to be released in October and a teaser has been released.

"Hwayi : A Monster Boy" is about a boy named Hwai (Yeo Jin-goo) who lives with five criminal fathers and whose life is completely changed by leader of a gang named Seok-tae (Kim Yun-seok).

The teaser provokes curiosity of the boy Hwai who goes through dramatic changes. The teaser shows Hwai crying, "I don't think I can do it" and Seok-tae who says, "You think you're different from your fathers? That you're clean?" Then Hwai quickly changes without a breath and then in the end, Hwai is in the arms of Seok-tae as he asks, "Father, I have a question. Why did you raise me?"

"[Video] Kim Yun-seok and Yeo Jin-goo's "Hwayi : A Monster Boy" out in October"
by HanCinema is licensed under a Creative Commons Attribution-Share Alike 3.0 Unported License.
Based on a work from this source