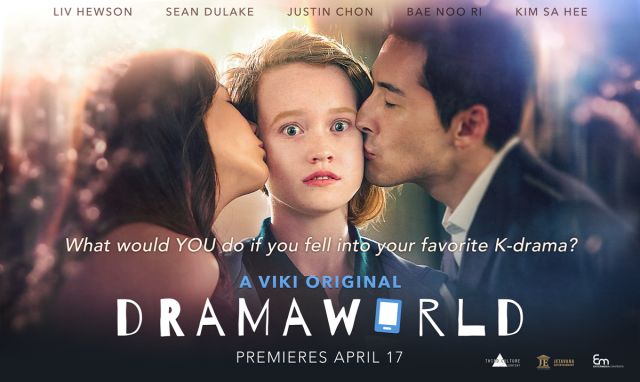 10 episodes
"Dramaworld" is a co-production between the USA, China and Korea
Synopsis
What is the most exciting - and most terrifying - thing that can happen to a K-drama fanatic? Claire Duncan is a 20-year-old college student who finds her real life boring. Maybe that's because she's never looking up, instead having her nose buried in her smartphone and watching her favorite upcoming Korean drama, "Taste of Love", starring her favorite actor Joon Park (Sean Richard Dulake). Joon Park plays the hot chef and protagonists in "Taste of Love" who is still waiting for his one true love to come into his life. Through a touch of the supernatural and a sprinkle of magic, Claire's desire to shed her own boring life and live in the world of "Taste of Love" comes true when she is transported into her favorite drama and comes face-to-face with Joon Park! There, Claire also meets the mysterious waiter Seth Ko, who made his own journey into the drama years ago from the real world and mentors Claire on how to navigate the drama world. When the appearance of Claire throws "Taste of Love" off-balance, causing other dramas to splice into the series, what kind of crazy adventure will Claire experience? "Dramaworld" is a 2016 Viki original series, produced in partnership. Set in Los Angeles and Seoul, the first-ever American-upcoming Korean mashup series is written by Josh Billig and Chris Martin and directed by Chris Martin.