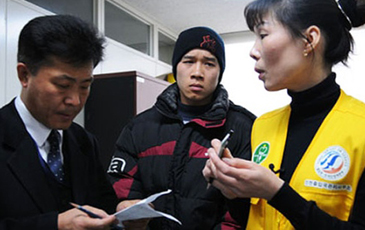 Le Thi Anh Thu (R) is working as a volunteer for Vietnamese brides and their Korean mates at the Immigration Control Bureau in Incheon. Photo: Tuoi Tre

As many girls nod their heads in agreement after seeing the Korean men only once, they easily become disillusioned when their Korean husbands, of whom they form high expectations based on popular Korean dramas, turn out to be poor or mentally or physically handicapped.

Responsibilities for failures in these international marriages, however, are not theirs alone. After all that is said about their economic motives for tying the knot with Korean men, the fact remains that the majority - 52.9 percent - of Korean men who marry foreign wives live in absolute poverty, according to the Korea Women Migrants' Human Rights Center in Seoul City.

Han Kuk Yom, director of the center responsible for providing support and protection of women immigrants in South Korea, offered some recommendations for foreign brides to consider before they decide to marry South Korean men and migrating to the country.

During the interview with Tuoi Tre journalists in Seoul, the director kept apologizing for recent murder cases of Vietnamese wives by their Korean mates.

"It's not only your pain, we feel the pain too. And we are ashamed of it", she said. "We must take urgent actions to ensure these terrible things will never happen again".

The fact that most Vietnamese girls marrying Korean men through marriage broker services raises serious questions to be resolved, she said.

"These services operate on the basis of profit. They don't care about providing accurate information about the Korean husbands-to-be and life in South Korea to the women, as long as they can persuade the women to enter the marriage with their clients. What happens afterwards is none of their concerns".

"That's for the legal services in South Korea. In Vietnam, most marriage broker services are unlawful and unlicensed.

"So, my advice to Vietnamese brides is not to place their life and happiness in the hands of those services, not to take their words at face value", she added.

Le Thi Mai Thu, one of the Vietnamese brides, agreed with it, "Broker services in Vietnam don't even give the girls time to think. As a result, they are afraid of missing the chance to marry a Korean husband and so make a hasty, ill-informed decision.

"Many girls met the men in the morning and had their wedding ceremonies in the afternoon, so the men can catch their flight back home.

"We are alone and helpless right from the very beginning in Vietnam", Thu summed up the situation of most Vietnamese brides.

According to some statistics, 46 percent of emergency calls to Korea Women Migrants' Human Rights Center are made by Vietnamese brides, while foreign brides in South Korea come from many other countries including China, the Philippines, Japan and Mongolia.

Though South Korean men are required to take a month-long course on the culture and customs of their wives before being granted marriage certificates, most men believe it is the responsibility of the wives to study Korean culture, said professor So Quang Suk at the center.

Expanding the circle of help

Recently, many well-educated Vietnamese brides in South Korea have made great efforts to help bridge the gap of understanding between Vietnamese women and Koreans and improve their images in the nation.

A program host on Radio Kiss in South Korea, Minh Ngoc, a Vietnamese overseas student, has become well-known to the Vietnamese community and locals. Funded by Korean government's aid, hers is the only program broadcast in Vietnamese in South Korea aimed at supporting multi-cultural families.

"I want to do something to help Vietnamese brides", Ngoc told Tuoi Tre.

"I agree that they marry Korean men for economic stability, but everyone has the right to pursue their own happiness".

Le Thi Anh Thu, formerly vice chairwoman of the Vietnamese Community in South Korea and herself a Vietnamese bride, is another example of a Vietnamese woman making relentless effort to educate and protect foreign brides in Korea.

She said she never hesitates to work as a court interpreter for free to help Vietnamese women defend their rights, especially at divorce courts.

"There should be more discussion forums and organizations in Vietnam to help young Vietnamese brides get sufficient information about what's waiting for them ahead before coming to South Korea", she proposed.

Most arrangements for international marriages in South Korea are intended to be mutually beneficial - men facing a shortage of eligible brides and women seeking economic stability. Differing expectations, abuse, and fraud, however, cause many of these marriages to end in separation or divorce.

International marriage broker services exist to meet the demands of a growing number of single Korean men, largely because increasingly well-educated Korean women are reluctant to live in the countryside and also because of the gender imbalance. Men outnumber women in Korea as a result of its cultural favoritism toward sons, producing a surplus number of single men looking abroad for wives.

The above story is provided from Tuoi Tre News.
http://www.tuoitrenews.vn/

"Viet Brides in Korea Part 4: Finding Opportunities on Rough Road Ahead"
by HanCinema is licensed under a Creative Commons Attribution-Share Alike 3.0 Unported License.
Based on a work from this source