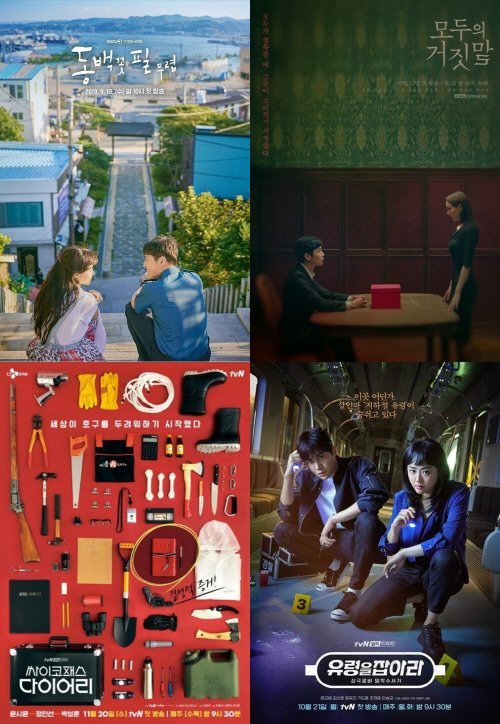 Stories of killing, being killed, and looking for the truth to it have become a thing these days. It's a must for dramas. Although thrillers have become a common factor in the general trend of dramas, it is also notable that the plots are mostly based on murder.

One of the most exciting points of the KBS 2TV drama "When the Camellia Blooms" is the identity of serial killer Gga-bul. There are many factors to the popularity of the drama, such as Yong-sik (Kim Ha-neul) and Dong-baek's (Gong Hyo-jin) romance, and the human stories inside the countryside of Ongsan, but 'finding Gga-bul' takes up some space.

Gga-bul was intense from the beginning. The appearance of the wrist of a woman killed by Gga-bul succeeded in making a grand opening. Because Dong-baek is a witness to murder, he threatens her. He writes creepy messages on the walls of her bar and corners her.

Now, the drama has passed the turning point, but Gga-bul's indentity is still hidden, so viewers are curious about it. It is said that it is being kept a secret by the production team so that it'll never be leaked.

"The Lies Within" started off with a cruel murder too. Kim Seo-hee's (Lee Yoo-young) husband Jeong Sang-hoon (Lee Joon-hyuk) went missing and even her father, Kim Seung-cheol (Kim Jong-soo), passed away from an unknown accident. The end of the first episode showed a piece of Jeong Sang-hoon's body being delivered to Kim Seo-hee. The main focus of "The Lies Within" is to find out who is doing such a cruel and evil thing and solve it.

TvN's "Catch the Ghost" revolves around subway patrol Yoo Ryeong (Moon Geun-young) and Go Ji-seok (Kim Seon-ho) tracking down a serial killer. Next month's tvN drama "Psychopath Diary" tells the story of Yook Dong-sik (Yoon Si-yoon) picking up a serial killer's diary and thinking he is the serial killer. KBS 2TV's "I Wanna Hear Your Song" is about timpanist Hong I-yeong (Kim Sejeong) witnessing a murder and then losing her memory.

Murder is now a favorite subject in ordinary dramas, that are more popular than movies and certain genres. It is not necessarily a thriller or horror, but it becomes a major motif and drives the play. It is a fact that it can increase interest, as it is a unique stimulating factor, but it also reflects the mood of our society, which is bitter.

"In the past, there was a sense of distance towards murder cases in dramas, but it is no longer the case", a broadcasting source said. "That's because we come across a lot of terrible events through the news", he said. "We have to sympathize with the idea that such things could happen around us. The gap between reality and the reality that the public feels about violent incidents has narrowed compared to before. This trend stems from the social issues which have led people to seeking such stimulating content", he said.

"Violent Crimes, a Common Subject in Dramas"
by HanCinema is licensed under a Creative Commons Attribution-Share Alike 3.0 Unported License.
Based on a work from this source