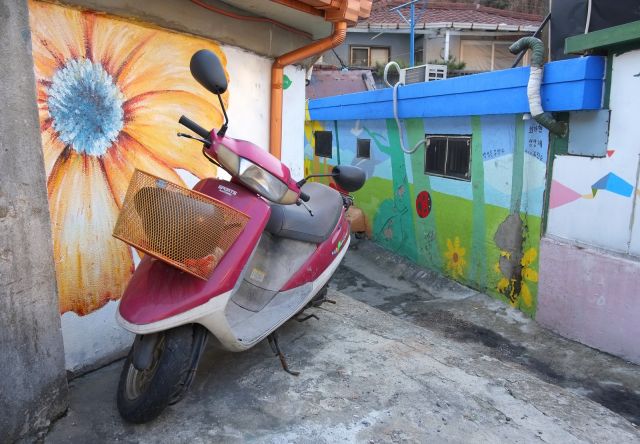 At 100-58, Segeomjeongno 4-gil, Seodaemun-gu, Seoul is the "Ant Village", one of the few poor hillside neighborhoods. The village is named such because its residents work hard from very early in the morning to late at night without losing hope despite their destitute situations. The village, which had few outside visitors, became famous recently after it appeared in a hit Korean movie "Miracle in Cell No.7" as the neighborhood where the main characters lived.

The Ant Village was created when the urban poor who had nowhere else to go after the 1950-1953 Korean War put up tents as their temporary shelters. Located on a steep hill, the village overlooks the Naebu Ringway and nearby apartment complexes. The village of roofs and doors so closely spaced is in stark contrast with the nearby downtown area of Seoul full of high risers.

The desolate neighborhood has been instilled with new life as a group of university students created 51 colorful wall paintings themed with "welcome", "family", "movie-like life" and "the end and the beginning". The walls of dimly-lit alleys were painted with yellow sunflowers, while those of old, unlicensed buildings were given pictures of colorful balloons. The pretty wall paintings have attracted many tourists, who take pictures against the backdrops of the buildings. The owner of a house with a puppy wall painting wrote a joke on his wall, saying, "I am a star so please send me my modeling fee to my account".

Local residents say that the village was once called "Indian village" because their tents resembled tepees of Native Americans in American Western movies. The village gained the current "official" name in 1983 as the residents worked diligently and village seniors took care of neighbors` children while their parents were away at work. To get to the village, visitors can take the town bus No. 7 outside Exit 2 of the Hongje Station of Seoul Subway Line No. 3.

"Wall paintings instill new life into 'Ant Village'"
by HanCinema is licensed under a Creative Commons Attribution-Share Alike 3.0 Unported License.
Based on a work from this source