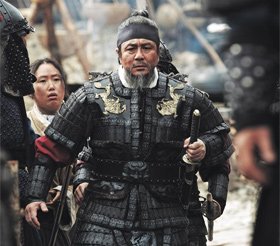 "The Admiral: Roaring Currents" pulled 1 million cinemagoers in just 37 hours after its release on Wednesday.

According to distributor CJ E&M on Thursday, a total of more than 1 million moviegoers had watched the film as of 1.30 p.m., achieving the milestone faster than any other film.

The war movie attracted 683,072 spectators on its first day alone, another record.

Only two films have ever drawn over 1 million viewers in two days -- "Snowpiercer" and "Secretly and Greatly".

Of the flicks that attracted more than 10 million spectators, "Avatar", "The Host" and "The Thieves" took three days to hit the 1 million mark, and "Masquerade" and "The Attorney" four.

"War Movie Pulls 1 Million Viewers in 2 Days"
by HanCinema is licensed under a Creative Commons Attribution-Share Alike 3.0 Unported License.
Based on a work from this source