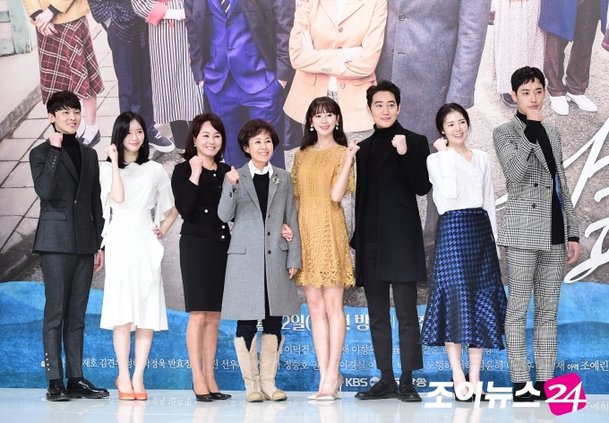 The cast of KBS drama "Waves, Waves" came together.

Park Sun-young comes back for the first time in 11 years, Sung Hyun-ah in 7, and Lee Kyung-shil in 3. Dal Shabet's Jo Ah-young and Rainbow's Jung Yoon-hye are also in the drama.

Lee Kyung-shil made a speech. She is taking on the role of Yang Mal-soon, a nosy and curious character.

She said, "I wished I could be in a drama before a TV show if I worked again. In TV shows I have to talk about myself, but in a drama I can represent someone else. I am happy to be in this drama and it's my first time trying out the Kyungsang-do dialect so we'll see how that goes".

"Waves, Waves" is a human family drama about Oh Bok-sil who loses her family in the war, but never gives into the harshness of life and achieving her dreams.

Jo Ah-young takes on the role of Oh Bok-sil, a singer wannabe and Jung Yoon-hye is Bok-sil's friend Kim Chun-ja. "She looks greedy and headstrong, but she's actually fragile inside. She's a singer wannabe just like me".

"I feel pressure because this is my first leading role. I am working with responsibility".

Jung Yoon-hye took on the role of Oh Seung-ah in "TV Novel - The Woman's Ocean". She said, "The group Rainbow is over, but everyone is doing well. They will monitor me and it'll be a lot of help".

""Waves, Waves" Cast Gathers for Press Event"
by HanCinema is licensed under a Creative Commons Attribution-Share Alike 3.0 Unported License.
Based on a work from this source