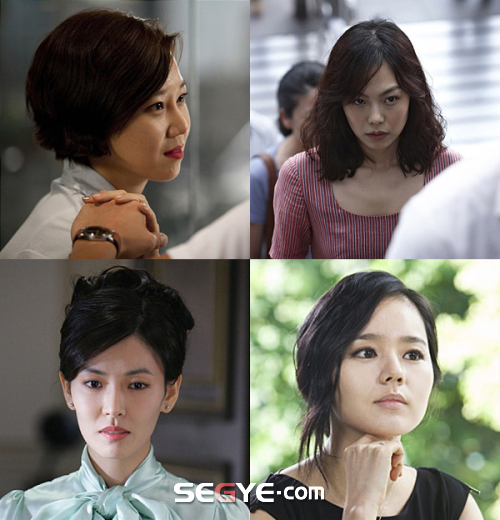 Spring in March, the activities of actresses with strong ticket power is coming to attention. These actresses are Gong Hyo-jin, Han Ga-in, Kim Min-hee and Kim So-yeon who are all about the same age in their early thirties but withhold different appeals.

Gong Hyo-jin (32) starts off first. She took on the role of career woman Lee Hee-jin in the comedy movie "Love Fiction" that was released on the 29th of February. She is also the perfect woman Koo Joo-wol (Ha Jung-woo) has been looking for all throughout his thirty something years of life. With the 'armpit hair' episode an issue about the movie, Gong Hyo-jin doesn't seem to mind the image of an actress when it comes to acting and was cool about it, making people say, "Gong Hyo-jin indeed!". "Love Fiction" is currently ranking top 1 of the box office.

Actress Kim Min-hee (30s) stars in the mystery movie "Helpless". Coming in August, this movie is about a man who searches for his missing fiancé but discovers shocking truths about her. Kim Min-hee portrays a lovable and mysterious femme fatale at the same time.

Kim So-yeon is starring in a movie for the first time in 14 years. She leads in the historical movie "Gabi" as Tanya. She holds an important key to a case and is loved dearly by Ilichi (Joo Jin-mo). Kim So-yeon is about to portray the elegance of a woman from the end of the 19th century. Based on an original by writer Kim Tak-hwan, "Gabi" will be released this coming 15th.

Han Ga-in had already starred in the movie "Architecture 101" before the MBC drama "The Sun and the Moon" which is currently soaring through the viewing percentage of 40%. This being her first movie in 7 years since "Once Upon A Time In Highschool", it is about to unravel a romantic story between a man and a woman. Han Ga-in in the movie finds her friend of 15 years Seung-min (Uhm Tae-woong) and asks him to build her a house. Coming this 22nd, Han Ga-in portrays a more mature and beautiful woman in this movie unlike "The Sun and the Moon".

"[WE+Movie] March, actresses compete in Chungmuro"
by HanCinema is licensed under a Creative Commons Attribution-Share Alike 3.0 Unported License.
Based on a work from this source