Wed.Thu drama war... which is the lead? 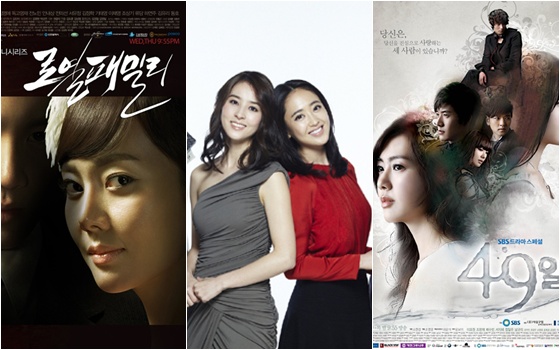 After the end of absolute lead drama "Sign" there is about to be a new fight for the throne. Curiosity builds up on which drama among the 3 TV broadcasting companies will rise to the best after the end of "Sign" and the start of "49 Days".

It looks like "49 Days" will not gain the benefit of "Sign". It started off with a one digit percentage that is far from even the average of "Sign", which was 18.7%. It is on alert at the fact that it started off at the lowest rate of dramas in the same time schedule.

However, "Royal Family" and "The Thorn Birds" started seeing light as "Sign" ended. They made the best so far and is putting on speed. In "Royal Family", In-sook's (Yum Jung-ah) has revenge has officially started and "The Thorn Birds" started off with the main characters and their complicated relationships, attracting viewers with a different taste.

However, "The Thorn Birds" might have to watch out for "49 Days". Now begins the fight to stay away from being the last. "Royal Family" in first place also needs to try harder to create a bigger gap with its competitiors.

Which drama out of the three will have the last laugh is in attention.

"Wed.Thu drama war... which is the lead?"
by HanCinema is licensed under a Creative Commons Attribution-Share Alike 3.0 Unported License.
Based on a work from this source