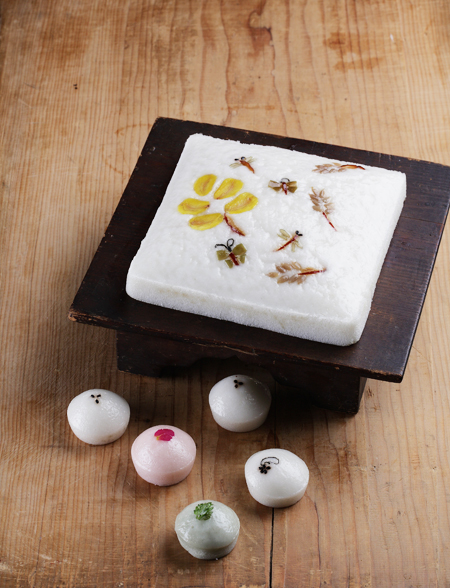 "Jeungpyeon", a fermented rice cake with makgeolli, is good for a summer dessert as it is less likely to go bad compared to other kinds of rice cakes. / Courtesy of Institute of Royal Korean Dessert

This wise piece of advice can certainly be taken in Korea with a variety of desserts gaining popularity here, both a as snack or as suggested, to start a meal but more commonly to finish it.

Most often eaten desserts - cake, tart, chocolate, pudding, macaron and more - are from the West. But healthy Korean desserts are being rediscovered in modern ways as well. 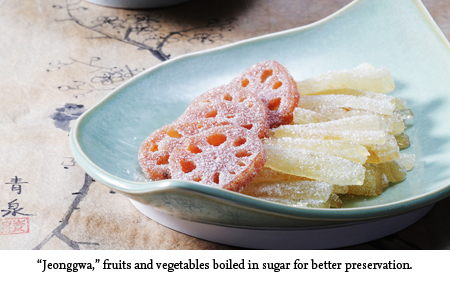 Jeong Gil-ja, important intangible cultural asset No. 38 and head of the Institute of Royal Korean Dessert, said ancestral Koreans made rice cakes and confectionaries that would not go bad in summer.

"For instance, mung beans or peeled red bean, popular filling for rice cakes, doesn't last long in the summer heat. So we make rice cakes without fillings or use roasted fillings", Jeong told The Korea Times.

"Jeungpyeon" is a popular kind of rice cake in summer. The "tteok" is made from rice flour and "makgeolli", or rice wine and steamed after fermenting. 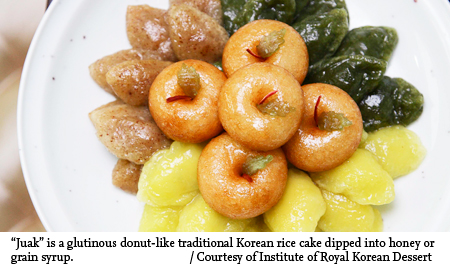 "'Kkaechalpyeon', or rice cake covered with roasted sesame, is typically made during hot summer months. Fried rice cakes such as 'juak' and 'jeonbyeong' also last longer in summer", she said.

Juak is similar to a glutinous rice donut dipped in honey or grain syrup, so the texture of juak is very unique as the syrup oozes when it is eaten. "Korean desserts are very scientific. When making juak, we add ginger to prevent oxidization of the frying oil", Jeong said.

Other than rice cakes, there are many Korean traditional confectionaries consumed when the weather is like a sauna outside. 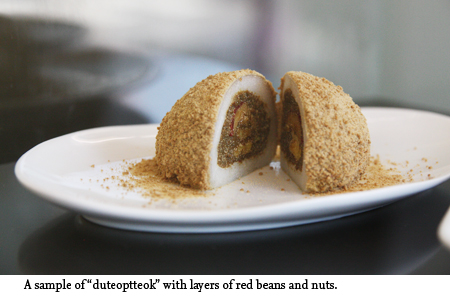 "In Korea, confectionaries are also called 'jogwa', or artificial fruit. So in summer, people tend to eat abundant real fruit, not confectionaries. However, there are always those with a nagging sweet tooth who need more than just fruit", Jeong said.

Jelly-like confectionary "gwapyeon" is a representative Korean summer dessert, made by boiling fruit, starch, honey and sugar. It could be made with a variety of fruit, including "omija", while the mung bean starch functions as a gelling agent.

In summer, Korean cherries and apricots were the most popular ingredient for the jelly-like confectionary. The sweet and sour taste and beautiful colors are perfect as an appetizer or for wrapping up a meal. 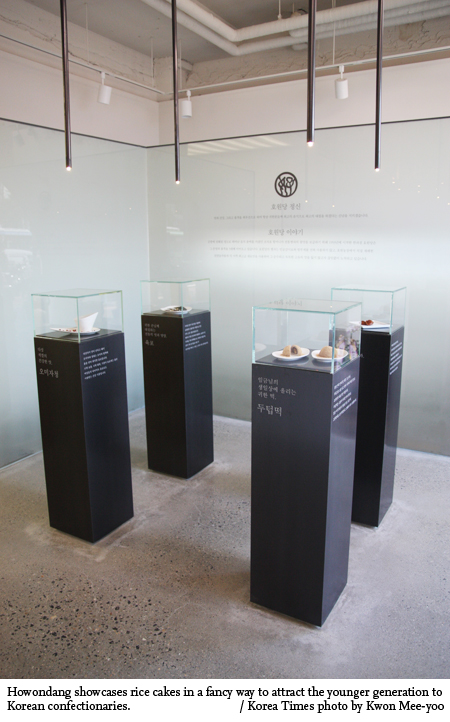 "The unique aspect of this gwapyeon is that it is served with raw chestnuts. We usually put the jellylike sweet on a slice of chestnut. Since gwapyeon is sweet and soft, it balances well with the clean and hard chestnut texture", Jeong said.

"Jeonggwa" is another popular summer confectionary, by boiling fruit in sugar.

"In the olden days, there were no refrigerators and preserving with salt or smoking food was popular. For desserts, they boiled fruits or vegetables in sugar to preserve it better", she said.

"Jehotang" is a representative summer drink. In the Joseon Kingdom (1392-1910), the palace pharmacy served the drink to the king and the king offered it to Giroso, a club of retired elders including the living preceding king, while toasting to spend the summer season well.

"Jehotang is made with plums, white sandalwood and other medicinal herbs such as 'chogwa' and 'sain'," Jeong said. "Brewing these herbs and adding honey makes a healthy summer drink".

"Podocha", a mix of crushed grape and pear with ginger juice and honey, was also popular as the temperature rose.

There are many rice cakes shops and some of them have a long tradition and reproduce the genuine taste of Korean desserts, while others add a modern twist.

Choi Chang-soon, the owner of Howondang, said she learned rice-cake making from her mother-in-law Cho Jah-ho, a cousin of Joseon's last Queen Yoon.

"I thought I had to join in her efforts to preserve the tradition of Korean desserts", Choi said.

Howondang offers juak made with jujube and Angelica gigas, but Choi points out "duteoptteok", a rice cake which has layers of nuts and red beans in it, as the shop's representative item. "The rice cake was mostly served in the royal palace, especially on king's birthdays", she said.

The newly-moved store of Howondang near Ewha Womans University in Sinchon, Seoul has a museum-like showcase presenting rice cakes as if they were jewels.

"The most important thing is making rice cakes with good ingredients and we get all the ingredients directly from our farm", Choi said. "However, the younger generation is not so familiar with Korean desserts and we pay attention to design and packaging to attract them".

Rice cakes and confectionaries of Howondang are priced from 300 won to 2,500 won. "We pack them individually or in small quantities and set the price low to make Korean desserts affordable", she added.

Her two daughters run branches of Howondang in the Los Angeles area. "Foreigners might not like the sticky texture of rice cakes, but I heard that they like having coffee with our confectionaries such as the honey cookie 'yakgwa'," Choi said. "Currently, all our recipes are wholly traditional, but I asked my daughters to research ways to modernize rice cakes and attract more young people".

There are two stores in Seoul - one near Ewha Womans University and one in Apgujeong - and three in the Los Angeles area. Visit www.howondang.co.kr or call (02) 363-0855 for more information.

"[Weekender] Summer dessert  Korean style"
by HanCinema is licensed under a Creative Commons Attribution-Share Alike 3.0 Unported License.
Based on a work from this source