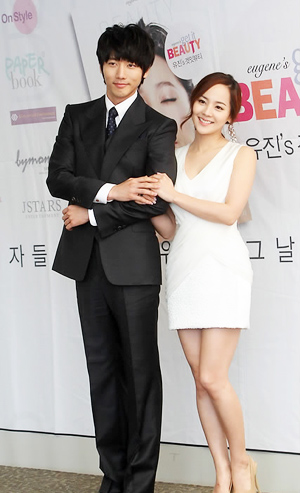 Once again it's time for weekly star scene, your update of the latest comings and goings in entertainment.

: We have our oh so unique reporter Dami in the studio with us! Hello Dami!

[Reporter : ] : Hello 건영 and Sean! Now we recently there has been some exciting news about a big star couple! ^.~ That's right! I am talking about Eugene and Ki-Tae-yeong. The announced to a roomful of press that they will be tying the knot this year! Let's go ahead and join everyone at the scene of the press conference where both stars were all smiles in announcing their big day!

The beautiful star couple Eugene and Ki Tae-young recently announced that they will be getting married.

They revealed that they found love on set while filming the 2009 TV drama "Creating Destiny".

[Interview : Eugene, Singer and actress] "We found love while filming the drama, "Creating Destiny". We began dating when the drama ended. Tae-yeong will tell you who asked who out first".

[Interview : Ki Tae-young, Actor] "At first, I wasn't close to Eugene because of my shy nature. Then near the end of filming, I overheard her talking with the staff and realized she was a good person, just like me, and that's what drew me to her".

The fans were shocked at their sudden wedding announcement but most sent them their sincere congratulations.

[Interview : Ki Tae-young, Actor] "Everyone was happy for us, especially our parents. Maybe some of Eugene's fans were sad. Some of them even scolded me".

[Interview : Eugene, Singer and actress] "Everyone was so happy for us. It was even a little sad because no one seemed sorry to see me go. Everyone was so supportive, and I am very grateful".

Eugene and Ki Tae-young will sound the wedding march on July 23rd. Let's wish them all the happiness in their lives together.

Chinese Actress Tang Wei who was recently crowned best actress at the 47th Paeksang Arts Awards has now landed a commercial in Korea.

She became the brand model for a new TV model and had to coordinate with Hyun Bin in an interesting way for the shoot.

We also hope to see more of Tang Wei's unique charisma on the silver screen.

Stars showed up for the VIP premiere of Uhm Jung-hwa[엄정화]'s new movie "Mama",

Actress Han Hye-jin is among the first to show in a white shirt and hot pants. She is known to be close friends with Uhm Jung-hwa.

[Interview : Han Hye-jin, Actress] "I heard "Mama" was so touching that it made everyone cry. I'm really looking forward to it".

Actress Ryeo Won who recently starred in the movie "Sleeping With the Enemy" also showed up.

[Interview : Ryeo Won, Actress] "The first thing that came to mind was that I needed tissues. I heard it was really moving".

Singer Lee Hyo-ri with her famous fashion sense, did not disappoint us as she showed up in a sexy backless mini dress.

[Interview : Lee Hyori, Singer] "I was invited by Uhm Jung-hwa, who didn't tell me anything about the movie but just told me I had to come. I hope "Mama" will be a great success. I'll be rooting for it".

Riding on the support of the stars, the new movie "Mama" will open in theatres on June 2nd.

The group UV which took 2011 by storm with their hit song "Itaewon Freedom" have been appointed as PR ambassadors for Yongsan-gu district office.

They were chosen because of their song "Itaewon Freedom" about Itaewon, one of the most famous places in Yongsan district.

[Interview : Yu Se-yun, Member of UV] "I heard Muzie would be setting up a bar in Itaewon. We expect to gain a lot from that".

[Interview : Muzie, Member of UV ] "Itaewon in Yongsan is very crowded with people from all over the world. I will personally patrol the area to make sure it is safe".

UV has been gaining in popularity with their funny lyrics and performances. Let's look forward to more hits from the entertaining duo.

"Weekly Star Scene"
by HanCinema is licensed under a Creative Commons Attribution-Share Alike 3.0 Unported License.
Based on a work from this source