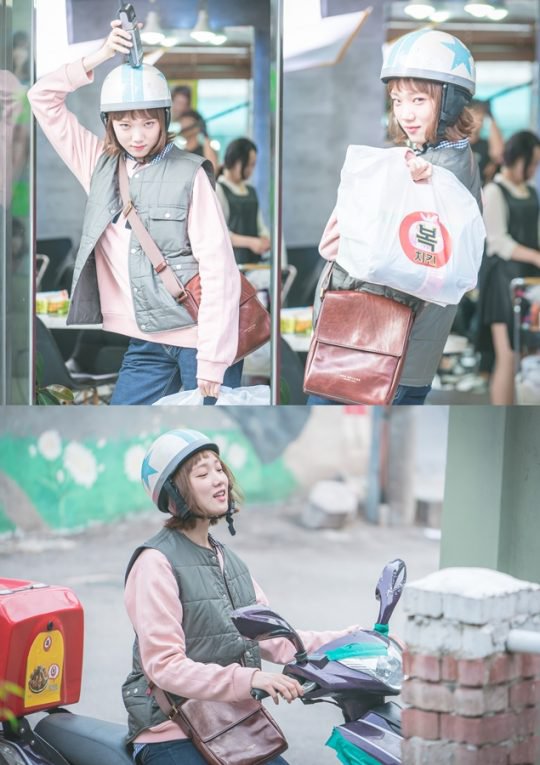 She plays Kim Bok-joo in the new MBC drama "Weightlifting Fairy Kim Bok-joo". Lee Sung-kyung has always been a city-like and stylish character in most of her works but this time, she's an ordinary weightlifting girl who is in search for love and dreams.

Pictures of Lee Sung-kyung were released on the 31st. She's posing with the card reader on her head or with the bag of chicken over her shoulders.

This scene was taken on the 20th. She's delivering chicken for her father's chicken restaurant. She took the time to pose for the camera while preparations were being made.

Lee Sung-kyung made conversation with the guests at the salon she was 'delivering to' while on break and knew how to use the card reader.

Bok-joo is a thoughtful girl who understands her father who does his best to support his daughter. Along with Nam Joo-hyuk, Kyung Soo-jin, Lee Jae-yoon and others, "Weightlifting Fairy Kim Bok-joo" is going to be a drama that doesn't disappoints.

"Weightlifting Fairy Kim Bok-joo" is written by Yeong Hee-seung and Kim Soo-jin-III while it's directed by Oh Hyeon-jong.

""Weightlifting Fairy Kim Bok-joo" Lee Sung-kyung becomes a chicken angel"
by HanCinema is licensed under a Creative Commons Attribution-Share Alike 3.0 Unported License.
Based on a work from this source