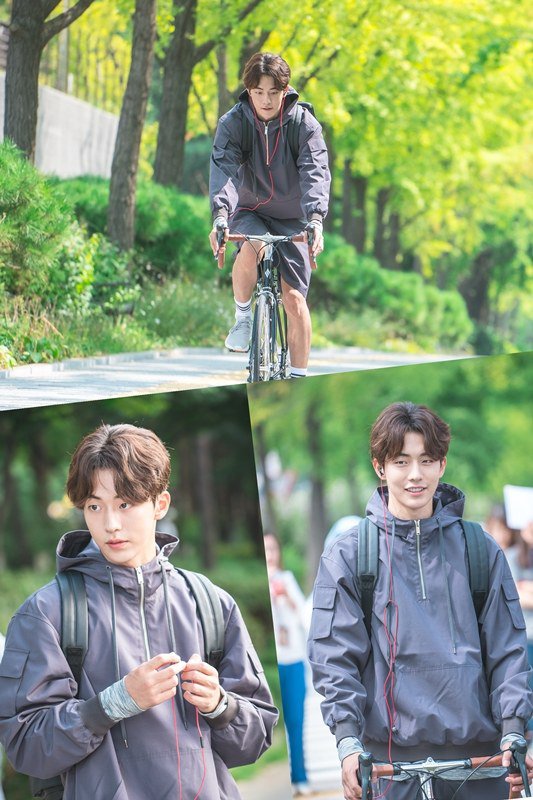 Jeong Joon-hyeong is a young man with strong character. Nam Joo-hyuk who has been active in dramas and entertainment shows, will prove his popularity through this drama.

Jeong Joon-hyeong is a rising swimming star but he has a trauma. Along with Kim Bok-joo (Lee Sung-kyung) the weightlifting fairy, he overcomes his troubles and finds his dream and love.

In the first take of Nam Joo-hyuk's role as Jeong Joon-hyeong, he is wearing a hooded jumper and is riding his bicycle along campus. In another picture, he's stopped his bike and looks like he's thinking hard about something.

These pictures were taken on the 12th of last month in Seoul. It was still hot but Nam Joo-hyuk had to take this scene wearing much thicker clothes.

Nam Joo-hyuk has been swimming for his character. His tall height, wide shoulders and energy is perfect for the role.

Nam Joo-hyuk said, "I couldn't wait to start filming right away. I've been working out hard and working on the psychological condition of an athlete with a trauma".

"Weightlifting Fairy Kim Bok-joo" is a youthful drama about a weightlifting young woman who finds true love. The drama is written by Kim Soo-jin-III and directed by Oh Hyeon-jong.

The first episode can be seen in November.

""Weightlifting Fairy Kim Bok-joo" Nam Joo-hyuk becomes swimming genius Jeong Joon-hyeong"
by HanCinema is licensed under a Creative Commons Attribution-Share Alike 3.0 Unported License.
Based on a work from this source