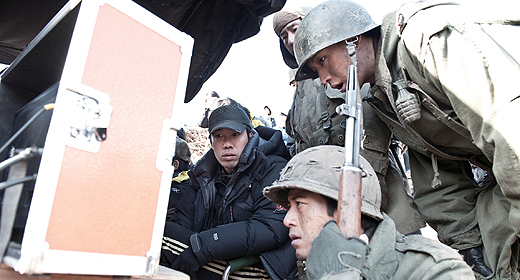 The distributor has acquired all North American rights to the Korean War drama from director Jang Hoon.

It also reported that Well Go President Doric Pfardrescher said, "Our mission is to bring the best in Asian film to the North American market and "The Front Line" is a perfect fit with our goals".

Set during the ending of the Korean War, the film depicts the relationships and horror of the North and South Korean soldiers battling over a small piece of mountainous terrain.

Starring Shin Ha-kyun and Go Soo, previously did pre-sales to Showbox Media Group for UK and STG Multimedia for Thailand.

A former Kim Ki-duk protégé, director Jang Hoon had previously established his name as a strong box office contender with his debut action drama and the spy thriller .

"Well Go USA picks up "The Front Line""
by HanCinema is licensed under a Creative Commons Attribution-Share Alike 3.0 Unported License.
Based on a work from this source