What about 'daddy' Uhm Tae-woong? 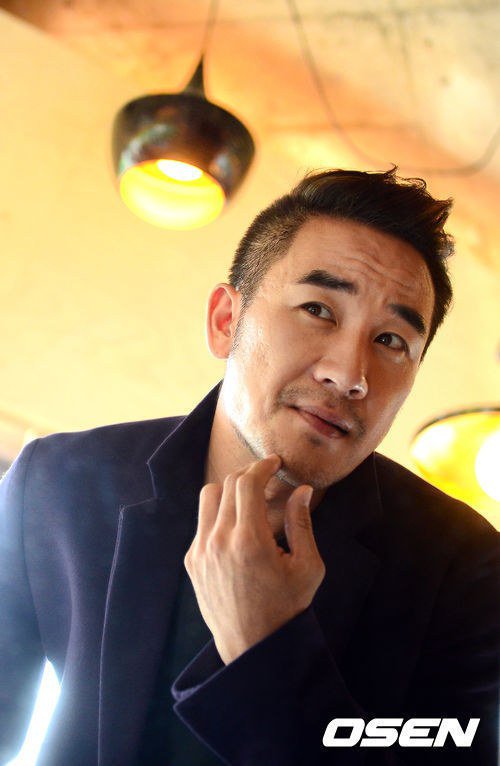 'Uhm Force' has been a long time nickname of his. Uhm Tae-woong usually plays a strong and charismatic male character in movies such as "Revenge", "Wolf", "Devil" and dramas "The Equator Man" and "Sword and Flower". His recent movie was no different. He played the typical 'tough guy' and stood out by having a unique personality in most movies, which is why he has an even fan base from both women and men.

However, his image has started to change ever since he got married. He's become friendlier and nicer.

Uhm Tae-woong in "Sensible Love" played Jang Hee-tae, dominated by his wife Kim Il-li (Lee Si-young). He resembled Gun-woo from the movie "My Sassy Girl" played by Cha Tae-hyun. He was swayed by the strong female character and aroused laughter.

Uhm Tae-woong then starred in the KBS 2TV show "Happy Sunday – 1 Night 2 Days" until 2012. He announced his marriage on this show and married Yoon Hye-jin, a ballerina and actor Yoon Il-bong's daughter.

To see Uhm Tae-woong but as a daddy this time is more than welcoming. He is looking forward to meeting the public once again as a friendly father.

"Superman Is Back" is loved by many for the 'star daddys' appearing friendly and domestic. The show stars Tablo, Choo Sung-hoon, Song Il-gook and Lee Hwi-jae and their children. They are true and humane on the show. What will Uhm Tae-woong be like on the show?

"What about 'daddy' Uhm Tae-woong?"
by HanCinema is licensed under a Creative Commons Attribution-Share Alike 3.0 Unported License.
Based on a work from this source