What is Suzy to Lee Min-ho? The 'Suzy Manual' 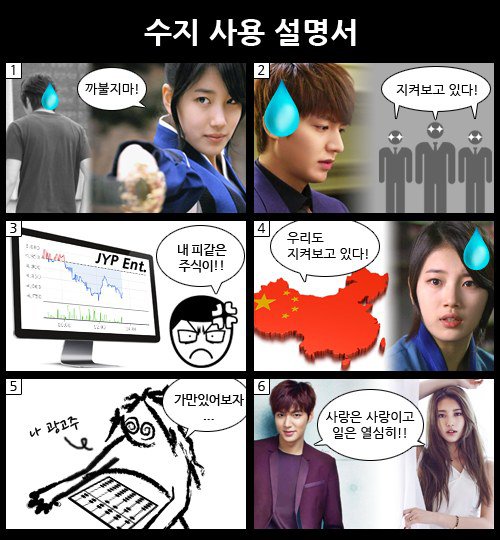 The web is burning with news about Lee Min-ho and Suzy being 'a thing'. It's no surprise a pretty girl and handsome boy are attracted to each other but the two of them are role models for lots of people and many want to know who has the upper hand. In Chinese people's eyes, it's Suzy that's even but not for those 'uncle fans' who had Suzy in their hearts.

We don't know what attracted them to each other but according to known facts we have created a 'Suzy Manual' to show what Suzy should be to Lee Min-ho.

A Taekwondo Master girlfriend – Suzy is an official level 2 in Taekwondo. Of course she won't fly kicks at Lee Min-go but he does need to be careful. She didn't just learn it from any neighborhood gym. Her father is a level 6 Taekwondo master and is the leader of the Worldwide Youth Taekwondo Competition. Lee Min-ho might be good in action but it's not the same in real life so he better make sure nothing goes wrong while he's seeing her. What about those 'uncle fans'? – Suzy earned several nicknames such as 'National Sister' after "Architecture 101". If Lee Min-ho realizes how interested the 'uncles' are in Suzy's first boyfriend, he has to be careful. They might not be friendly.

Watch out for the JYP stock market – As soon as scandal between Suzy and Lee Min-ho broke out, the JYP stocks have dropped. The drop in stocks means that Lee Min-ho and Suzy's relationship is not helping Suzy's value in the market. They have to watch out for the investor as well. Reassure the Chinese – Lee Min-ho is a known 'God' in China; Chinese media are going crazy over this scandal of the year. In Suzy's case, her reputation might become 'goddess' level in China thanks to her relationship with Lee Min-ho. Therefore, Lee Min-ho should watch out for the Chinese media if he wants this relationship to create synergy results. China speculated Lee Min-ho and Park Min-young's relationship to be a fraud once. Importance in communicating with the ad agents – Lee Min-ho and Suzy appear in many ads. Ads mean 'money'. Ever since the scandal broke out, the agents have been throwing beads. As much as they are being paid in high numbers, their image might affect the products they promote. They need to be in communication with the agents if they want this to go well. If they continue to keep a steady relationship it could appeal as being responsible and they could even end up with new ads. For example, Ko So-young and Jang Dong-gun have had the benefits of promoting apartments after their marriage.

An escape plan – Seeing their young age, Lee Min-ho and Suzy are closer to breaking up one day then heading for marriage. It might be helpful if they prepared for the breakup with a song or something like that. Everything needs an escape plan.

"What is Suzy to Lee Min-ho? The 'Suzy Manual'"
by HanCinema is licensed under a Creative Commons Attribution-Share Alike 3.0 Unported License.
Based on a work from this source