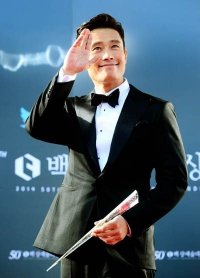 Hundreds of fans from South Korea and Japan gathered amid joyful shouts and a frenzy of camera flashes when Lee Byung-hun and Takuya Kimura showed up together at Paradise Hotel in Pusan last Thursday. The rendezvous of the two superstars was quite a sizzling event in the southern port city.

The meeting was made as Lee signed a contract with Fuji TV to make a cameo appearance in Kimura's new film Hero. Kimura visited the port city with the filming crew to shoot on location for the cinematic version of the Japanese hit drama.

Overwhelmed by the welcoming fever, the two stars expressed their excitement of working together and expressed hope that it will result in success.

"I've seen a lot of commercials by Lee in Japan", Kimura said during a news conference at the hotel. "He has this angelic smile and is a powerful actor with huge impacts on the audience. I think simply working with him in the same place and same time will be of a great honor".

Lee also expressed his confidence in working with Kimura, saying that their first conversation was as if they had known each other before.

"In the past when I didn't know much about Japanese film culture, I visited Japan to shoot a music video", Lee said. "And everywhere I went, I saw advertisement boards with this handsome man, who I later learned was Kimura. It gave me a strong impression about the actor".

Lee will play a Korean prosecutor who aids a Japanese counterpart, played by Kimura in the film. For the preparation, Lee said he watched a two-hour special edition of the drama, and its attraction is that the series deals with crime-related stories in a humorous way.

"When I first got the offer, I was worried if I might ruin the film", Lee said. "But sadly, my appearance in the film is quite short, and I guess my job will be to be part of the film without giving the impression that I'm there".

Although Lee's appearance will be short in the film, Kimura expressed high expectations for Lee's contribution to the work.

The conference was only for the news media, but the front gate of the hotel was crowded with nearly 300 hundred fans who waited to see their stars entering the hotel from their cars, which lasted 10 seconds.

Earlier, hundreds of his fans flocked to the Kimhae International Airport in Pusan to see Kimura up-close. Many of the fans had waited for two days while chanting his name and singing songs for him.

"I've seen a lot of passionate Japanese fans of Korean wave (Hallyu) stars, who flocked to the Narita Airport to welcome them to Japan", Kimura said. "Now I feel like here I have become one of the Korean wave stars in Japan".

Lee is filming his new movie, "The Good, the Bad, the Weird", by director Kim Jee-woon, and had to have two days off to film Hero in Pusan.

The original drama debuted in 2001 on Fuji TV, starring Kimura and Takako Matsu, and it recorded the highest viewer ratings with more than 30 percent at the time. Even in Korea it was broadcasted on cable and satellite televisions _ a far less successful showing than in Japan.

The Japanese star is scheduled to leave the country May 1 after the filming concludes.

"When Two Mega Stars Meet"
by HanCinema is licensed under a Creative Commons Attribution-Share Alike 3.0 Unported License.
Based on a work from this source