Which celebrity would you like to experience the first snow of this winter season with? 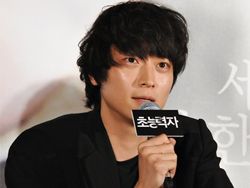 Which celebrity would you like to experience the first snow of this winter season with? Well, the netizens have spoken and according to one survey, the most popular celebrity was actor Gang Dong-won.

The online music site Monkey3 reported the results of a survey that they conducted titled, "Which star do you want to experience the first snowfall of the winter season with". A total of 603 participants answered and Kang took 32% of the votes. Voters said that that they couldn't be happier than if they had the very high-class looking Kang by their side. The popular actor recently started his four week military training on the 18th to start his mandatory military service.

Trailing after him, 19% of the votes went to the ever so popular Shin Mina, 18% for elegant actress Lee Na-young, 15% for Super Star K 2 finalist John Park, 9% for the chiseled-face actor Jang Keun-suk, and 7% for the nation's now grown up darling, Moon Geun-young.

"Which celebrity would you like to experience the first snow of this winter season with?"
by HanCinema is licensed under a Creative Commons Attribution-Share Alike 3.0 Unported License.
Based on a work from this source