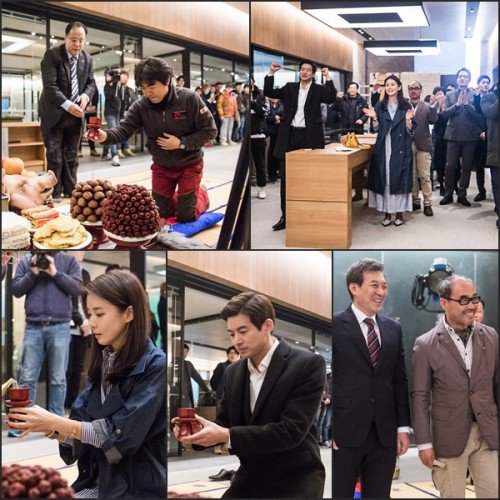 The cast and crew of "Whisper" paid their respects for the success of the new SBS drama "Whisper".

Pictures of the ceremony were released on the 7th.

The ceremony took place on the 5th with Lee Bo-young, Lee Sang-yoon, Kwon Yool, Park Se-young, Kim Kap-soo, Kang Shin-il, Kim Seo-ra and others including the staff and crew.

Director Lee Myeong-woo said, "I wish for the message of "Whisper" to be delivered to society. I hope the drama succeeds and I hope all the casts are wanted in all award shows at the end of the year".

Lee Sang-yoon and Kwon Yool made speeches wishing for the success of the drama, for the well-being of everyone involved and their determination for the drama.

Meanwhile, "Whisper" will air after "Defendant". It is based in Taebaek about a man and woman who fall in love of risk their lives for it.

""Whisper" Lee Sang-yoon, Lee Bo-young and Kwon Yool pay respects for success "
by HanCinema is licensed under a Creative Commons Attribution-Share Alike 3.0 Unported License.
Based on a work from this source