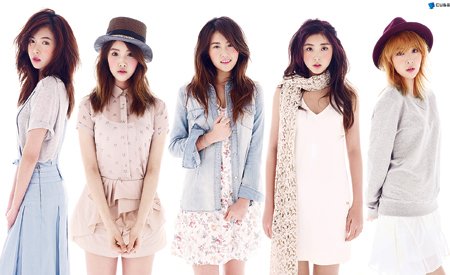 Members of Korean girl group 4minute pose in a promotional photo. The "little girl" concept is seemingly out of character for the three-year-old act most associated with thumping beats, athletic choreography and provocative costumes. / Courtesy of Cube Entertainment

With their bouncy, boisterous character, 4minute are known to us for hits such as "Hot Issue", and "Heart to Heart". The five-member K-pop girl group were formed by Cube Entertainment in 2009.

Its members are Kwon So-hyun, 17, Heo Ga-yoon, 22, Kim Hyun-a, 19, Son Ji-hyun, 22, and Jeon Ji-yoon, 21. Each one is truly passionate about music and has pursued a variety of training programs including language classes to improve themselves.

They made a successful debut in June 2009 with the single "Hot Issue". Since their first release, the girls have endeavored to become a leading group by setting trends and constantly trying new things. The most recent EP "Volume Up" attracted much public and media attention for their provocative outfits nd dancing, which the group describes as a "vampire look". The EP comprises of seven tracks with both ballads and dance tracks featuring "Femme Fatale", and "Black Cat".

Kim, a former member of the Wonder Girls, also has a solo career. She released her first single "Change", which became hugely popular followed by such EPs "Trouble Maker" in 2011 and "Bubble Pop!" in 2012.

The idol group has also proved popular in Japan since their first Japanese album "Diamond" was released in December 2010, followed by a maiden concert there. 4minute have also taken part in several international tours with other K-pop stars.

"Who are 4minute?"
by HanCinema is licensed under a Creative Commons Attribution-Share Alike 3.0 Unported License.
Based on a work from this source