Who is the guy held from the collar by Kim Hee-sun? 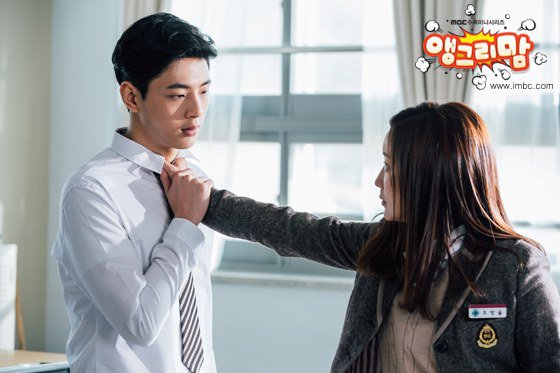 "Angry Mom" is the story of a mother who used to be a gangster in the past; she becomes a high school student again and deals with school violence.

The story usually takes place in Myeong Seong High School where Ji Soo appears as Go Bok-dong. He stars in the drama with Kim Yoo-jung, Baro and Park Soo-young-II and is the 'power of the class'. He acts tough but inside, he's lonely and frightened.

Ji Soo was seen held by the collars by Kim Hee-sun in uniform. His pretty visual and charisma has fans anticipating his appearance in the drama.

Ji Soo debuted in 2009 with the play "Bom Sam Wasn't There" and starred in various short films. He lead starred in the Korea – Philippines collaborated movie "Seoul Mate" recently.

"Angry Mom" will be released on the 18th of this month.

"Who is the guy held from the collar by Kim Hee-sun?"
by HanCinema is licensed under a Creative Commons Attribution-Share Alike 3.0 Unported License.
Based on a work from this source