Who is the winner of new dramas? Cheeky Go Go VS Glamorous Temptation VS Six Flying Dragons 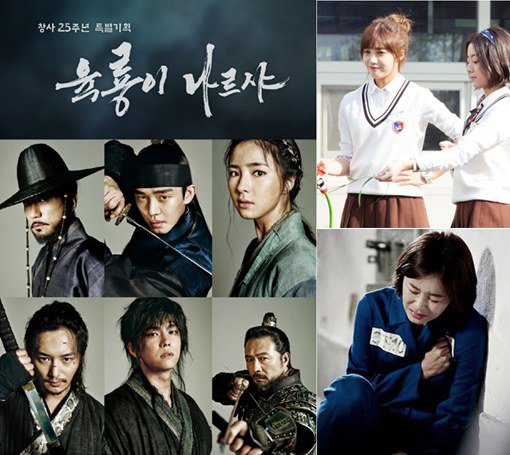 After the golden holidays of Chuseok is over, the three broadcasting stations will start over with new dramas. It's too early to say anything but anticipation builds. Who will be the winner?

This is the newest school themed series by KBS. It's never won percentage wise, but the point is to draw the attention of viewers in their 10s and 20s. The drama is about a cheerleading club full of troublemakers in Setbit High, a prestigious high school. The characters are similar to those from "Answer Me 1997".

A weekend drama by MBC. A working-mom with a 7-year-old son puts behind her impoverished past and enters a world of 1% high class. Choi Kang-hee attempts at a new image and Kim Sae-ron will be playing her younger self.

Yoo Ah-in is in the middle. He's in the peak of his career with "Veteran", "The Throne" and now this. "Six Flying Dragons" stars Kim Myung-min, Byun Yo-han, Yoon Kyun-sang, Chun Ho-jin, Shin Se-kyung and others. The drama is written by Kim Yeong-hyeon and Park Sang-yeon and it revolves around Lee Seong-gye and Lee Bang-won.

"Who is the winner of new dramas? Cheeky Go Go VS Glamorous Temptation VS Six Flying Dragons"
by HanCinema is licensed under a Creative Commons Attribution-Share Alike 3.0 Unported License.
Based on a work from this source