Who will be the male lead in 'Descendants of the Sun' writer Kim Eun-sook's next drama? 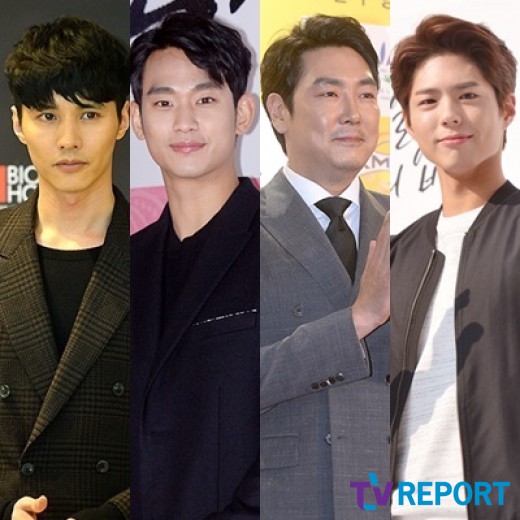 Writer Kim Eun-sook is called 'Prince Maker'. Park Shin-yang, Kim Woo-bin, Lee Min-ho, Hyun Bin, Song Joong-ki have been loved for their roles in Kim Eun-sook's dramas. Who will be the next one of 'Kim Eun-sook's magic'?

While KBS 2Tv's 'Descendants of the Sun' is about to finish and the huge popularity is still going on, writer Kim Eun-sook appeared in KBS 1 radio show 'Hello, This is Hong Jim-yeong' and mentioned about her next drama and casting".

Kim Eun-sook said, "Since 'Descendants of the Sun' is still airing, I want be careful, however, casting for the next drama is going on. I hope the actors I've been keeping eyes on is listening to this show".

Kim Eun-sook's next drama with the secured airtime on tvN is based on an Asian folklore. The main character is a dokkaebi, a Korean folklore ogre or demon. Below is four actors recommended by TVReport.

Kim Eun-sook's favoritism for actor Won Bin is famous. Jang Dong-gun's name in her drama 'A Gentleman's Dignity' was Kim Dojin, which is Won Bin's original name. Because of this, there were rumors that her next drama at the time might Won Bin. Jang Dong-gun's cast was actually accomplished because Kim Eun-sook sent out a hint through the lines in "On Air" and "Secret Garden". Won Bin, who is a dad now, it's time for him to show his more grown-up side as an actor.

Kim Eun-sook's dramas have been starring actors who are handsome as well as talented. However, Kim Soo-hyun has not been on her list yet. It is because Kim Soo-hyun has been working with writer Park Ji-eun. Since SBS 'My Love from the Star' and then KBS 2TV's "Producers", he was been keeping his career relationship with writer Park Ji-eun. Since he was an alien once, how about he challenges with a new role as a dokkaebi this time?

We don't know the age of the dokkaebi of Kim Eun-sook's next drama. If the character happens to be a little older, then it must be Cho Jin-woong. Cho Jin-woong emerged as a trendy popular actor since his role in tvN's 'Signa'. He is regarded as one sexy guy who plays a handsome role because of his superb acting in his previous drama with tvN. He will be next number one handsome actor in his middle-age after Park Shin-yang and Jang Dong-gun.

The sought-after star Park Bo-gum is also on the candidate list. He is good-looking and can act. He is definitely a good match for the qualities of the actors in writer Kim Eun-sook's dramas. As he is expected to broaden his acting spectrum for his confirmed role as the male lead in the forthcoming romance period drama, 'Moonlight Drawn by Clouds'. This is one of the reasons why Park Bo-gum should be considered for Kim Eun-sook's next drama.

"Who will be the male lead in 'Descendants of the Sun' writer Kim Eun-sook's next drama?"
by HanCinema is licensed under a Creative Commons Attribution-Share Alike 3.0 Unported License.
Based on a work from this source